Yoyogi Park, Tokyo Then and Now

Located in the Yoyogi area, Yoyogi Park is a very large green tract of land in the center of Tokyo and it provides Tokyo residents with a place of relief by acting as an urban oasis.

Yoyogi Park is the 4th largest park within the 23 wards of Tokyo. It’s size is roughly the equivalent to the space of 11 Tokyo Domes. In this spacious park you can see the largest piece of unobstructed sky in central Tokyo. Together with the Meiji Jingu Shrine adjacent, the Yoyogi Park area forms a vast forested stretch of land.

With the Route 413 street crossing through the middle, the park is divided into Block A, represented by the Central Square and fountain, and Block B, represented by sports facilities and an event area.

Street between Block A and Block B

Block A is predominantly grass and trees. There is a pond and fountain with a pathway running along it with interspersed benches. Also located in Block A is a bird sanctuary with the favorite trees of birds having been planted there as well as a dog run where your dog can be released to spend time with other dogs freely. This block is developed as a forest park area. There are cycling routes, an open meadow area, and a sakura tree area for hanami during the cherry blossom season. 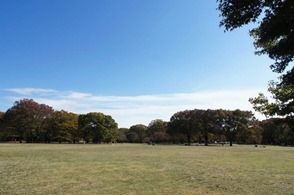 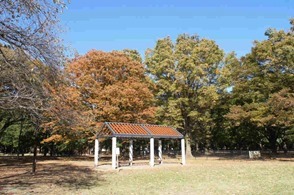 Block B includes stadiums for track and field, soccer, an outdoor concert stage, and an event square. This block is a very active area during the weekends in the warm season. There are various events held by different embassies within Tokyo showcasing their country specialties as well as many other events. A Street lined with Zelkova trees next to the event square that leads into the Shibuya area is a popular walking route.

In the middle of all the hustle and bustle of Harajuku, where youth culture and fashion intermingle, a single step into the park will make the city atmosphere fade away as your sense are enveloped by the surrounding nature, your eyes filled with the sight of greenery in this quiet and open space.

The current location of Yoyogi Park was originally a military training ground for the Imperial Japanese Army from 1909 all the way till the end of World War II in 1945.

The first flight of an air plane in Japan successfully took place here in 1910,  and there is currently a monument and two bronze statues of the pilots who made the flight possible to commemorate the event.

After WWII had ended, the location was used as a place for residences of the US Allied Occupation forces and was called “Washington Heights”.

During the 1964 Tokyo Olympic Games, some of the buildings were used as the athlete’s village (one of the Dutch athletes’ residences is still presently preserved for its commemoration).

After the Olympic Games, the buildings were torn down and the land was redeveloped. Yoyogi Park opened and became the first forested park in Tokyo. 1/3 of the land was covered with trees in October of 1967 (the park fully opened in April of 1971).

Apartments and Houses for Rent in Yoyogi
Listings of popular and luxurious apartments, condominiums, and housesdesigned with expats in mind.