Japan’s numbering system can be quite difficult for those from Western countries, where streets are clearly labeled with names or numbers. While Japan does have names for streets, they are never used in addresses (except for some occasions in Kyoto). Keep reading to learn everything you need to know about addresses in Japan.

It’s important to understand that the overall order of a Japanese address is reversed from what is typically used in the West. Rather than starting with the house number and ending with the postal code, it goes the other way. The usual order of operations is as follows:

Japanese postal codes are seven-digit numbers hyphenated between the third and fourth digit (000-0000), usually preceded by a postal code mark (〒). If you don't know your postal code, or if you do but don't know the address and want to search for it, please check Japan Postal Code Directory.

A prefecture is the largest division possible in Japanese geography (similar to a state in the United States). Most prefectures are denoted by the suffix 県 pronounced “ken” (e.g., Kanagawa-ken, Ehime-ken, Gunma-ken). Notable exceptions are Tokyo with the suffix都, pronounced “to,” to denote the nation’s capital (i.e., Tokyo-to), Osaka and Kyoto with the suffix府, pronounced “fu,” to show their more significant political and economic role (i.e., Osaka-fu and Kyoto-fu), and Hokkaido which has no suffix.

For most Tokyo residents, this is what ends in the suffix 区, pronounced “ku” (e.g., Minato-ku, Nerima-ku, Shibuya-ku). These 23 wards of Tokyo are considered special cities unto themselves with high populations in concentrated areas.

The suffix 市, pronounced “shi,” is mostly used for other large cities (e.g., Kobe-shi, Sapporo-Shi, Hiroshima-shi) but also can be used for some concentrated population areas in Tokyo (e.g., Hachioji-shi, Arakawa-shi, Tama-shi).

For more rural areas, Japanese addresses use the suffix 郡, pronounced “gun,” as a county denotation, since multiple townships could be needed to reach the population quota.

If you live in Tokyo, this part won’t be necessary, but rural areas will have a further suffix of either 町, pronounced “machi” or “cho,” or 村, pronounced “son” or “mura.” This is used with the “gun” suffix to often help further pinpoint the location. Please note that “cho” is not the same as “chome” described below.

If you live in Tokyo, you’ll see this information on plaques lining almost every city block, usually paired with the symbol 丁目, pronounced “chome.” This number tells you the district name and block number.

However, for floor numbers, you will either need to use the suffix 階, pronounced “kai,” or an abbreviated “F” following the floor number (e.g., 2F for second floor). The floor number will always follow the building name.

The most difficult part of Japanese addresses is understanding the district name and block numbering system.

Tokyo and other Japanese cities were not always built in tidy rows. With the “chome” system, cities are divided into districts 丁目 (chome). Then, each block in the district is numbered 番地, pronounced “banchi.” Finally, each building in the block is numbered 号, pronounced “go.”

Often, to simplify the address in writing, the suffixes (丁目, 番地, and 号) are omitted and the numbers are written in order with a hyphen in between each. For example:

This makes it easy for postal workers and delivery services to find your home without extraneous information. If you look at the map below, you will be able to find our office by using your understanding of Japanese address format. As shown on the map below, the first step is to locate the district, which in our case is "Azabudai." Then search for "1 chome," "9 banchi." Please note that the building number "12 go" is not displayed on the map below. For your convenience, we have marked it with a star symbol. 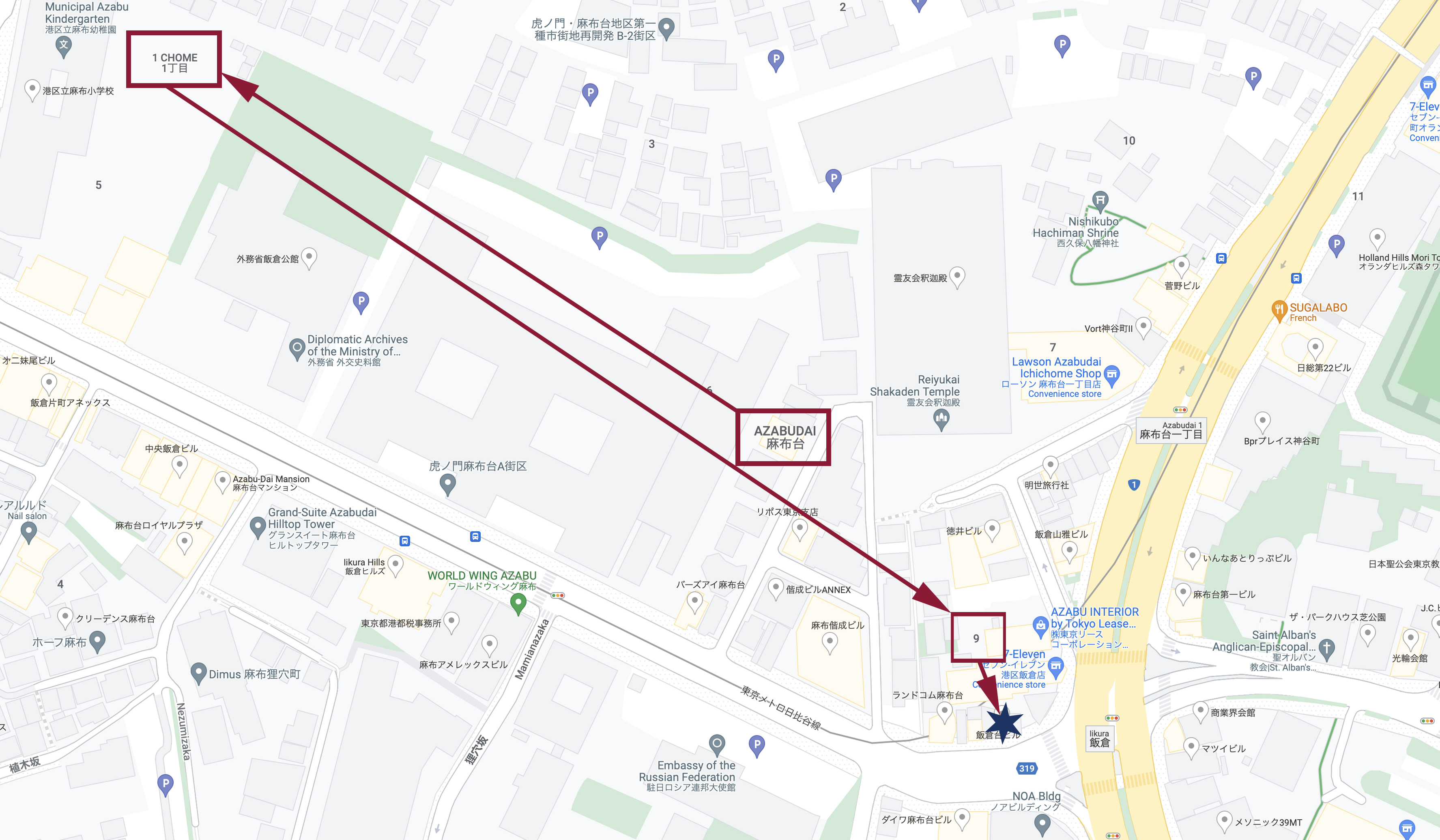 How to Write a Japanese Address

If you’re using a vertical envelope to address a letter within Japan, the address of the recipient goes on the front in the vertical box, with the postal code on the top. The address is written vertically, right to left, with the recipient’s name at the very end. Your address then goes on the reverse side (the same side as the flap).

If you’re using a horizontal envelope, you can write the address in Japanese or English. Be sure to put “JAPAN” in big letters at the top of the address if mailing to Japan from overseas. The recipient’s name and address are placed in the center of the envelope while the sender’s information is placed in the top left corner.

If you’re addressing a postcard from Japan to overseas, look for the portion of the card with the postal code symbol 〒, then address the card as it would make sense in your home country, but with the country name first. If you’re addressing the postcard to a Japanese address, please write as we’ve outlined above.

How to Place an Online Order Using a Japanese Address

It can be a bit confusing as to how to input your address on Japanese shopping websites, but once you remember the formula, it’s relatively simple. Most often, your prefecture, or “ken,” will be selected from a dropdown menu, and the rest will require manual input. You will likely need to know the Japanese characters for the prefecture you are selecting.

In this example, the address below would be input as follows:

How to Say a Japanese Address

Start big, with the prefecture, then work your way down to the house number. Every time there’s a hyphen in the address, you can use the word “no.” So the following example would sound like this over the phone:

Note:
You will also need to know how to pronounce Japanese numbers. There are many resources for learning the Japanese number system, but basic information on pronouncing numbers can be foundhere.

Tips for Finding Your Way in Japan

If you get lost, don’t panic! Inputting the address into Google Maps is a reliable option, but if your phone is dead or without signal, you can check signs around you to see if you’re in the correct district. If you’ve just arrived at a train station, try to get a map and directions from the local police box, usually located near the station.

While this may seem overwhelming at first, you will get the hang of it very quickly with a little practice. There are pros and cons to every address system, and while the learning curve can be a bit steep for Westerners, you will see the benefits for memorizing this system as you enjoy your time in Japan.

For more information on how to navigate Tokyo and beyond, we offer a wealth of transportation guides and information designed to help get you where you need to go.

* Japan Post Office Tips: Finding your Way
* Mail Forwarding in Japan: Domestic and International Options
* How to register or change your address in Japan