The Jonan Gozan (go= five, zan= mountain) is a term used to define the 5 hilltop areas in the Jonan (Jo= castle, nan= south) district of Tokyo - the area from Meguro Station to Shinagawa Station. The 5 mountains are respectively: Ikedayama, Gotenyama, Shimazuyama, Hanabusayama, and Yatsuyama. Each name derives from the name of a venerable Daimyo or celebrity from a Daimyo family whose residence had been located there since the Edo Era. These areas are all currently well-known high class residential areas and as a whole, the Jonan Gozan is regarded very highly within central Tokyo.

All the areas are located in convenient places within Yamanote Line. Taking one step into one of the areas, you find a quiet residential area spread out away from the hustle and bustle around the nearest station. The areas have been attracting high-ranking politicians and celebrities to place their residences since old days giving the areas high-class atmosphere. Many low-rise luxury condos built in spacious lands and stately houses with gates can be found there.

Luxury rental apartments and branded condominiums in the areas are often named not after the located address, but after the Jonangozan.

The area equivalent to the hill top location in 4 and 5 Chome, Higashi-Gotanda, Shinagawa-ku.

The name derives from the suburban residence of the Ikeda family of the Bizen Okayama Clan which was located in the area. It is a quiet, low-rise residential area a little away from the busy areas around JR Gotanda Station.

In this area the inner garden of the Ikeda family residence has been reserved as a Japanese-style garden named Ikedayama Park and the birthplace of Empress Michiko has been maintained as the Nemunoki garden.

The area equivalent to the hill top location in 3-6 Chome, Kita-Shinagawa, Shinagawa-ku.

In the old days the place was known for its cherry blossom trees and for its hill top location overlooking the Tokyo Bay. The name derives from the Shinagawa Goten which used to be there. It has been told that in the beginning of the Edo Era Shinagawa Goten was built by the Shogun Ieyasu Tokugawa, and ever afterwards, each generation of the Tokugawa Shogun family would visit the goten as a vacation and also to partake in falconry.

In Meiji Era there were many residences of wealthy families in the area, and in Showa period after World War II Sony Corporation moved their headquarters there and ever since then the area has been known as the place of Sony’s business foundation.

After Sony relocated to Minato-Ku in 2007 the vacant land of the head office was sold, and turned into a commercial facility “Garden City Shinagawa Gotenyama” and a luxury condominium complex, the “Prime Maison Gotenyama”.

The area equivalent to the hill top location in 1 and 3 Chome of Higashi Gotanda, Shinagawa-ku.

Back in the Edo Era there was the suburban residence of the Sendai Date Clan with its land of 75,000 square meters. In the Meiji Era the former lord of Kagoshima Clan Duke Shimazu purchased the area of land and built an English-style house there as a private residence, which was later used for many social events among business executives. Due to financial difficulties throughout prewar and postwar period of WWII, the ownership was transferred to Bank of Japan, and finally Seisen University purchased it and has possessed it to the present day. The house of Duke Shimazu which still exists in Seisen University Campus, is a beautiful European-style building of the renaissance style and has been designated as one of the 100 Famous Views of Shinagawa.

The area equivalent to the hill top location in 3 Chome of Kami-Osaki, Shinagawa-ku.

In the Edo Era there were many residences of Daimyo and during Meiji and Taisho Era there was a villa of the Viscount Hanabusa who was a famous diplomat and successively the president of the Japanese Red Cross Society. Presently the area is known as a quiet discreet residential area with luxurious condominiums and residences. Meguro Station of the JR Yamanote Line is nearby and the Embassy of Thailand and Colombia reside in the area.

The area equivalent to the hill top location in 3-4 Chome of Takanawa, Minato-ku.

There are various opinions to the origin of the name; one of them is that there were mansions of eight (yatsu= eight) feudal lords in the area, and the other is that there were eight capes in the area. After the soil of Yatsuyama was used for flood restoration and landfill of the Meguro River in the Edo era, the hill was levelled, and the area is mostly flat ground now. A landmark of Yatsuyama is Kaitokaku, which used to be the villa of Iwasaki family and is currently a monumental facility owned by the Mitsubishi group. The name Yatsuyama can be seen only in the name of streets, crossings, parks, and stores in the area such as Yatsuyama Dori (known as Sony Dori), Shin-Yatsuyamabashi, Yatsuyamabashi, and Higashi-Yatsuyama Koen. While the other area names of the Jonan Gozan are used positively for the naming of condominiums for branding purposes, in the Yatsuyama area the present address name “Takanawa” is generally used for naming instead. 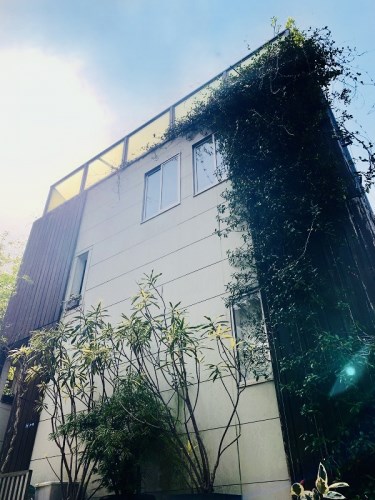 Located just a 3-minute walk from Takanawadai Station on the Toei Asakusa Line, the living environment makes you forget the hustle and bustle of the city. This custom-built building is full of green and Japanese taste. The two-story building with a roof terrace and one basement floor has a modern, functional and well-stocked system kitchen, a master bedroom with an open-plan balcony (adjacent to a powder room with a dresser designed by the owner), The basement floor has a Japanese-style garden with a tsukubai (a Japanese stone basin in a garden) and a hinoki cypress bath, creating a special living space with lots of character. The roof terrace is easily accessible from the kitchen and also equipped with an outdoor dining table and sofa, a gas BBQ stove and a hot air heater, as well as suitable for gardening. The building was constructed in June 2008 to new earthquake-proof standards. The total floor area is 123.75 square meters, with a bathroom, shower room and two toilets. The walk-in wardrobe on the first floor and the den (Tatami) on the B1F can also be used as a bedroom, so it can be adapted to suit your family's needs. Although the house is currently occupied, it is possible to view the rooms. We highly recommend for internal viewing. Please contact us for the viewing arrangement!