Moving to Japan: 6 Helpful Tips for Getting Settled 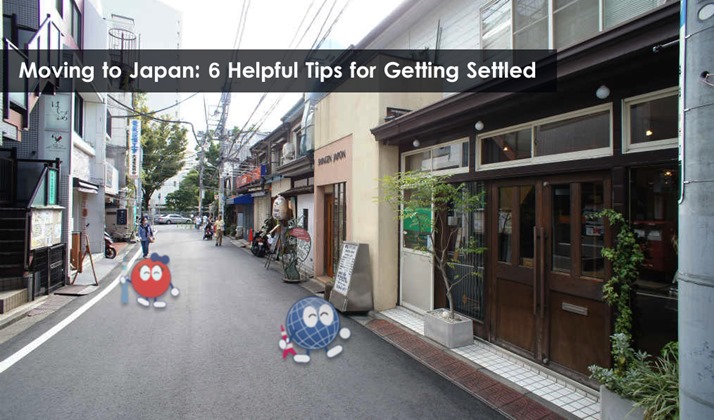 Moving to another country is never an easy task, even more so when you are moving to Japan! But no matter how strange, weird or exotic things may seem, life in any country ultimately comes down to basics like how to sort your garbage, how to take care of your pet, and how to get along with the other people in your community. Here are some tips that will help you to take the first steps to a smooth daily life in Japan.

6 Things to Do After Moving to Japan

After moving to Japan, one of the first things you could consider doing is greeting your neighbors. Nowadays most Japanese people who live alone do not bother doing this, as they may not consider their apartments part of a larger community. This is more common in the countryside. However, especially given your status as a foreigner, it would be both wise and polite to show some respect for the old custom, thus making a great impression on your neighbors and even possibly surprising them!

Within about one week of your move, you could offer a gift of sorts (towels are a popular option for Japanese people), and say that you are living in the apartment next door. It should be noted that the general time to do it should be during the day, preferably on a weekend when people are home.

Now, as you may not speak Japanese at all, how might you go about your greeting? After ringing the bell or knocking, Konnichiwa, _________ to moshimasu (Hello, my name is ________.”), a smile, a slight bow, and your outstretched hand (with present) may suffice; your neighbor will most likely know what is happening. If you want to add more detail about yourself, you might add the following: Tonari ni hikkoshite kimashita (“I moved in next door.”). Yoroshiku onegaishimasu (“Pleased to meet you.”). Making it a point to greet people you may only see in passing might seem like a strange custom depending on where you’re from, but for many people, it still helps foster a sense of community. With a few simple words you are no longer a stranger, a fact which might come in handy down the line.

One of the most surprising things about moving to Japan will probably be dealing with the way that trash is so carefully divided. There are generally two types of garbage segregation in Japan: combustible (moeru gomi), and non-combustible (moenai gomi). From here, everything depends on your city or ward, and even some apartment buildings differ in their trash segregation. Combustible trashes include papers, newspapers, magazines, or biodegradable trash (nama gomi). Non-combustible trashes include pet bottles, cans, or breakable items such as glass. You can buy special segregated trash bins for your home, but some apartments already have them inside the house.

Some cities or wards require designated trash bags which can be purchased a local convenience stores or supermarkets. Bigger areas like central Tokyo only require a typical plastic bag (white or clear) that you usually get when you buy groceries from the local super market.

Soudai gomi, or literally, “big trash,” refers to the disposal of furniture, electrical appliances, and such. To throw them out, you need to buy stickers (make sure to confirm the amount from the ward city office website, or ask a Japanese colleague or friend) and stick them on the item that you wish to throw out. While some areas have designated days of picking up soudai gomi, most places require you to schedule a day to have them picked up.

So what happens when you don’t segregate your garbage properly? While it is highly likely that the garbage collectors will ignore it and still pick it up, some garbage bags might find their way back to your apartment door eventually. Garbage is often hard to understand, but it is nonetheless a part of Japanese daily life. If you’re moving to Japan, particularly Tokyo, Plaza Homes has a more detailed garbage guide to help you literally sort everything out.

Separation and Disposal of Garbage and Recyclables in Tokyo

3. Take Care of Your Pets

Pets are an ordinary part of Japanese daily life, but having one is certainly not cheap. In fact, buying a pet can set you back anywhere from a few thousand yen to more than a million yen. Even if you get your pet from a shelter, you will be required to have it vaccinated, which costs a lot and is mandatory for all registered pets (which is also a requirement in different cities and wards).

The first thing to consider when you are getting a pet is whether the apartment or mansion you live in allows them or not. This is very important. Keeping a pet in your apartment without permission from the landlord can earn you more than a few glares from your neighbors – you can actually be evicted and even be required to pay a large sum of money, often constituting a month’s worth of rent. Check out this list for some pet-friendly properties in the Tokyo area.

Once you know whether you can actually have a pet or not, the next question is what kind you want. Dogs and cats are common pets in Japan, but exotic pets are generally rare and in some cases, not accepted as “pets.”

After you have bought an animal, it is necessary to register them as your pet. Go to the local municipal office to have them registered, and the staff will give you the instructions as to where the vets are and what kinds of vaccinations are required. Fortunately, Plaza Homes has created a list of animal vets in Tokyo just in case moving to Japan brings you to the capital.

While at the municipal office, it is highly advised that you get a collar for your pet, with your name (the owner) and address written on it for your pet’s safety as well.

Remember that while you might find pets adorable, caring for them takes a lot of responsibility as well. This includes feeding and exercising them properly, as well as cleaning up after them when on the street. Do not forget to bring a plastic bag with you when taking them for a walk! As a final question, you may be asking what to do when actually moving to Japan with pets in tow. For more details on that, check out our article on bringing pets to Japan.

Bringing Pets to Japan and Back: A Quick 4-Step Guide

4. Avoid Making Too Much Noise

Despite the amount of noise pollution that is often present in Japanese daily life, Japanese people themselves value silence above everything. It is everywhere: inside the trains, elevators, work offices. Silence is not only an important part of the Japanese culture, but also a method of communication.

Apartment walls in Japan are generally thin and people often live relatively close together, so any type of loud noise is frowned upon after midnight.

Often, neighbors will not complain to you directly, but instead will contact the police or the landlord, who will go directly to you. While usually the most you can get out of this is a reprimand, there are cases when people are evicted from their apartments because of the disturbance that they make. Although not a Japanese proverb, the simple rule “Silence is golden,” is a wonderful thing to keep in mind, both as a tourist but especially when moving to Japan.

There are many neighborhood associations in Japan known as chounaikai or jichikai. They are usually in charge of volunteering to cleaning up the neighborhood, or doing volunteer work in case of a calamity. Although you may not view joining your local neighborhood association as integral to your daily life in Japan, it’s actually a big plus since it would help you get to know more about the Japanese culture and people.

What exactly do they do? It really depends on which area you live in. This can range from the monthly (sometimes weekly) clean-up of the community, neighborhood patrol, participation in local festivals, and even going to the hot springs together. It’s one way to make connections after moving to Japan.

While being a foreigner in an almost all-Japanese chounankai may be awkward at first, you will get used to the flow of things. As most members are elderly people who know little to no English, having some grasp of Japanese is a definite plus - but that’s not to say you can’t start a language exchange! Show your willingness to belong and a friendly face, and you will be welcomed with open arms.

6. Get Involved in Your Community

Upon moving to Japan, you will most likely enroll your children in an international school. There will be meetings with the teachers, as well as other parents, and school events such as festivals and sports days. When you join these, you join not only as a parent of your child, but also as a member of the community. It is a great way to meet your neighbors and improve your relationship with other community members.

Regardless of your family situation, there are many ways to get involved. There are volunteer groups, sports groups, cooking groups, religious groups and everything in between, each with the goal of helping to improve your daily life in Japan and opening you up to new possibilities. As strange as things may seem at first, especially in a large city like Tokyo, there is probably a community activity or group that fits your tastes or preferences. To make it easier for you to find them, Plaza Homes has even compiled a helpful list of links.

Japanese Daily Life is Really about the Basics

Despite at first seeming exotic and different, Japanese daily life revolves around ordinary things like garbage assortment, keeping pets and just getting along with others. As you settle down after moving to Japan, remember that Plaza Homes is here to help. Regardless of how long you intend to stay, you can always count on us to lend a helping hand in making your time here even more pleasant.