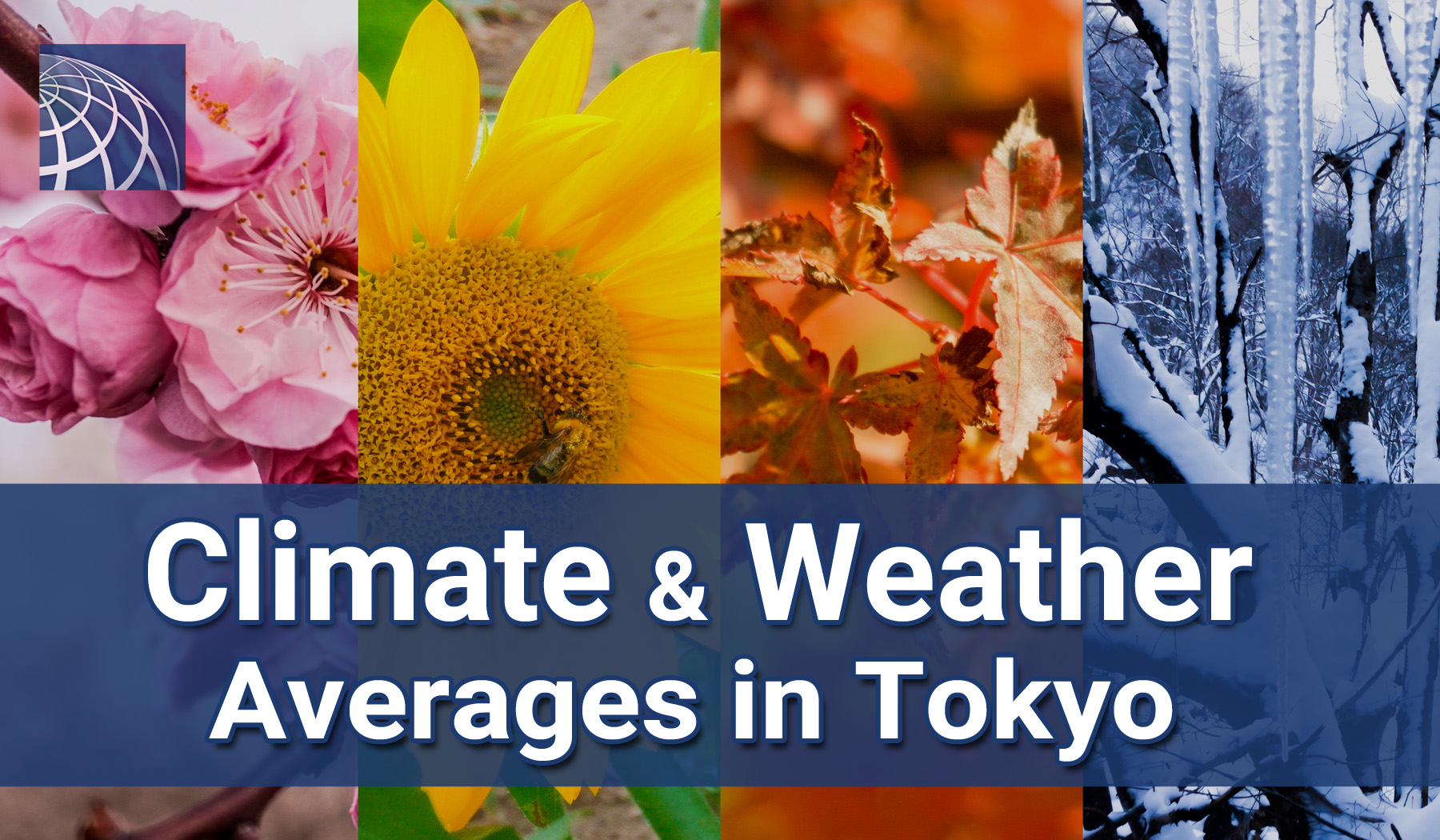 Tokyo, like most of the rest of the world, has a fair amount of seasonal variation in its weather patterns. For the most part, the weather is fairly mild and generally quite pleasant though there is a typhoon (also known as a hurricane or tropical cyclone) season that runs from July to September when the weather can get very bad, very quickly if a storm is passing by.

The below is the Rainfall Level and Average Temperature in Tokyo. Rainfall is more frequent from March through October, during which includes Rainy Season in June-July and Typhoon peak season in July - September in Tokyo.

It has been really unlike the average data for these past several years that the days of intense heat and the highest temperature more than 35 degree continue in summer due to global warming and heat island effects, and so we cannot spend a day without air conditioner.

The best times to visit are April-May, for the well-known blooming of cherry blossoms with pleasant climate, and October-November for autumn leaves changing and enjoyable climate. It can get hot and extremely muggy in July-August. Winter seldom brings snow and only a few days per year the temperatures drop below freezing. It is also helpful for you to see Seasonal Clothing idea above.

Surviving the Weather in Tokyo: Some Tricks & Tips

Tokyo is a big city and most people get around using public transit, bikes, or their feet. That means that once you leave home, you’re on your own when it comes to surviving inclement weather of any sort. Here are a few tips & tricks to make surviving close encounters with Mother Nature a little easier:

■ Precipitation: Always check the forecast before you leave for the day and pack an umbrella if rain is predicted. It’s no fun being caught in a downpour and waiting under the corner of a ramen shop’s roof waiting for the rain to pass.

o Pro tip: If weather forecasts aren’t to your liking, stick your head outside before you leave for the day and see if others are carrying umbrellas and follow their lead. If you do get stuck in the wet, you can always duck into the nearest convenience store for a cheap umbrella—they’re everywhere!

■ Heat: it can get quite hot in Tokyo so dress accordingly. Tokyo is a concrete jungle that displays the "heat island" effect common in big metropolitan areas.

o Pro tip: If you’re going to work, check and see if your office follows a "cool biz" dress code which is a set of comparatively relaxed dress guidelines encouraged by the Japanese government to help make life more comfortable for office-workers in the summer. It can include polo shirts and chinos instead of a suit, etc.

Japan experiences the four well-defined seasons familiar to residents of countries in many parts of the world. Temperatures range from an average maximum temperature of around 30 C in the summer to average minimum temperatures right around 0 C in the winter. Humidity follows the same trend, with quite high levels through the summer and early fall and then drying out in the winter. Likewise, rainfall is heaviest in the summer and autumn.

Weather in Tokyo During Spring

Spring is a great time to be in Tokyo. The temperatures are generally quite comfortable, ranging from cool to warm throughout and relatively low numbers of rainy days. The flowers, especially the cherry blossoms, are blooming—you will not regret attending a hanami party (flower viewing) in late March to welcome the Tokyo spring spring. Generally speaking, dress in one to two layers so that you can be warm in the morning chill on the way to work and then comfortable when the temperature warms up in the late afternoon sun.

Japanese cedar pollen is in the air from February through April.

Weather in Tokyo During Summer

Summer in Tokyo can be a little bit complicated because there are really two parts.

The rainy season typically runs 3-4 weeks in June and it is just what it sounds like: Rain all day, every day. There is some sunlight, but during that time you should plan to carry an umbrella and good waterproof shoes if possible. Temperatures tend to be cooler, accompanied by a general damp sogginess that lingers everywhere. You should consider a raincoat and warmer clothing during this period and also wear a couple of layers so that you can take that jacket off in the rare moments when the sun peaks through the rainy grey above.

Sometime around the last week of June, the rain clouds part, the sun starts shining, and the temperature rises, right on through to peak in mid to late August. This period can be blisteringly hot, so dress in cool clothing throughout this period and stay hydrated. You can always make use of the army of vending machines dotting the sidewalks of Tokyo if you’re in need of some water.

Typhoon Season in Japan (Peak is July to September)

How to Prepare for a Typhoon

Weather in Tokyo During Autumn

Autumn in Tokyo starts quite hot in September and ends with a chill in December that can reach your bones if you’re not careful. Just think about it like this: In late September, you wear one cool layer to stay comfortable in the heat. Add a jacket in October as it gets cool in the morning and then bring your gloves come November to make sure your fingers don’t catch a chill while you’re waiting for the train.

How to Prepare for a Typhoon

Weather in Tokyo During Winter

Winters in Tokyo tend to be chilly, though you aren’t likely to see lots of wintery precipitation like snow or ice. The weather tends to be a kind of uniform cold throughout without much variation day to day. It can dip to freezing temperatures quite regularly during the winter months, so wear warm clothing in multiple layers since many Japanese older buildings have little insulation and can be quite drafty. You’ll never know when you want that sweater.