For many expat parents, deciding where to live in Tokyo is based on where the child’s international school is located, which is why we have created this master map and guide below. Schools included here are highly reputed, accredited, and use English as the primary method of instruction (with few exceptions).

If you are looking for International Baccalaureate (IB) or Cambridge A Level accredited schools, please refer to this page.

In addition, we have separate guides that focuse on Islamic Schools in Tokyo for those looking for Islamic education in the Greater Tokyo Area, Japanese education system if you would like to know which school is best for your child and Japanese public school's customs.

Find a Tokyo International School near You

To find international schools near you, please click on the name of the Tokyo neighborhood where you live. 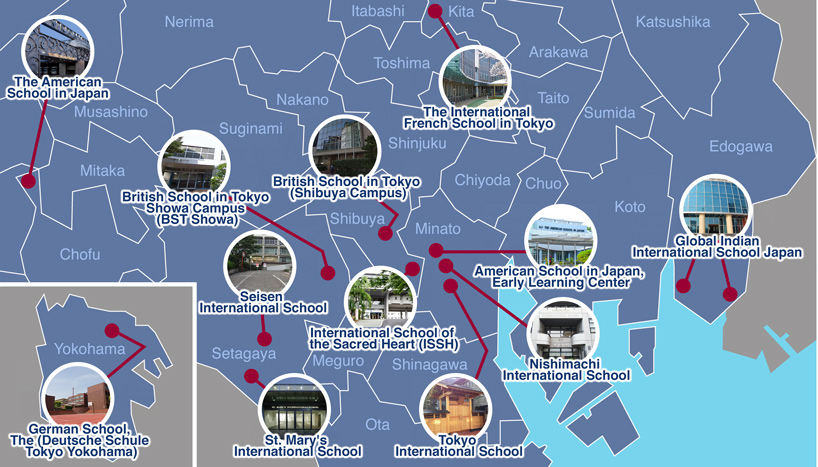 What Are International Schools in Japan?

Generally speaking, in Japan, the term “international schools” refers to educational institutions where English is the primary language of instruction. All International schools in Japan are privately owned, and the costs for attending them vary widely. While public schools are open to English-speaking children, there is often very little support available for non-Japanese speakers. In Tokyo, there are some public schools where they provide English-Japanese support. Please read further on the Public Schools' English and Japanese Language Support in Tokyo.

In general, there are two types of international schools. The first type is based on the curriculum of the country they’re affiliated with, like common core for elementary school students in the United States. This type of school is great for students who will be living in Japan for a short period of time and then returning to their home country.

The second type of international school is based on a more flexible curriculum—such as those taught at a Montessori or Waldorf school—and is widely available for younger children, especially in preschools. There are far more international preschools than primary or secondary schools as many Japanese parents now enroll their children in English preschools to help them get an edge in the public school system.

As far as international standards go for secondary school, the most common is the International Baccalaureate Diploma Programme (IBDP).

The IBDP is considered among the highest global standards for student excellence. Students take standardized tests with peers from around the world, so it’s also great for students who are transferring from other English-based schools within Japan. This curriculum is accepted by major universities throughout the world, with some even accepting it as equivalent to college credits. Some American universities will take up to 24 credits for good IB scores, knocking off an entire year of general education credits.

Tuition for international schools is often one of the biggest expenses for expat families living in Japan, with annual fees going as high as millions of yen. The average international school currently costs around ¥2,000,000 per year for pre-K, and steadily increases in cost with the age of the child.

For example, The American School in Japan, one of the most popular international schools in Tokyo, has a yearly tuition of ¥2,987,000 (about $27,000 USD). There are often first time registration fees and other expenses that are required as well, but these extra expenses vary between each school.

With so many different schools and teaching ideologies to choose from, it can be difficult to decide which school is best for your child. There are a few key factors to take into consideration.

How is your child traveling to school each day? Will you be living near the school, or will it be necessary to take the train? Many Japanese children commute long distances to go to prestigious schools and it isn’t unheard of for a child to ride a train for over an hour without an accompanying parent. For many foreign children who don’t speak the language, however, this can be a difficult task. Make sure your child is capable commuting alone, and try to live close to avoid the possibility of the child becoming stranded due to a train delay.

Please also refer to: Residential area for commuting to International Schools in Tokyo

If the school is accredited by any major organization, those certificates will likely be placed somewhere prominently within the school. It’s recommended to inquire about them if you don’t see them on display anywhere.

> International Baccalaureate (IB) vs Cambridge A Level - What are the differences?

What does your child like to do? Does the school have the facilities and mentors to foster that passion? More than academics or extracurriculars on their own, a good fit is essential for your child’s health and well-being, especially when living in a foreign country.

Once you have a solid understanding of these criteria, it will be much easier to create a short list of schools. The earlier you can do this, the better. An earlier start means a higher likelihood of getting in. *The more prestigious the school, the less space is available, so make a list of ranking your options of schools and visit all of them if possible.

In Chiyoda-ku you can find the French-speaking preschool, Au Pays des Sakuras and the English-speaking Chiyoda International School Tokyo.

There are many schools in the Setagaya-ku area. You can find The British School in Tokyo (Show Campus) located to to Sangejaya Station offering English education from Elementary school to High School. The all boys' school, St. Mary's International School, and the all girls' school, Seisen International School both offer a bus service so that students will have easy access to their school from within Central Tokyo. Setagaya-ku has a variety of preschools and kindergartens within its borders.

The Shinjuku-ku area is home to the Tokyo Waseda International Chirstian School (Takadanobaba) for Elementary to High School and the Tesoro International School (ages 2 to 6) in Iidabashi.

In the Toshima-ku area the New International School of Japan, located in Minami-Ikebukuro, offers education from preschool to high school.

In Kita-ku, The International French School in Tokyo known as LFIT ( Lycée français international de Tokyo) is located in Takinogawa and offers education from kindergarten to high school. A school bus service from Central Tokyo is also available.

As Edogawa-ku has a large Indian population, you will find the Global Indian International School there. The school has 2 campuses offering Indian style education; The Nishikasai Campus and the Higashikasai Campus.

K. International School Tokyo in Kiyosumi-Shirakawa and The Tokyo YMCA Internatioinal  School in Toyocho are both located in the Koto-ku area.

In Chofu City, The American School in Japan (Chofu Campus) offers Kindergarten to High School education and has a school bus service from Central Tokyo.

Schools in other areas in Tokyo (8)

For those living in Yokohama or nearby in Tokyo, there are many options for international schools. For a German-based educational curriculum there is the Deutsche Schule Tokyo Yokohama (DSTY) the offers classes from kindergarten to high school as well as a school bus service from Central Tokyo. Among the different international schools spread throughout Yokohama are the Horizon Japan International School, Yokohama Christian School, Yokohama Yamate Chinese School (Mainland China), and Yokohama Overseas Chinese School (Taiwan). 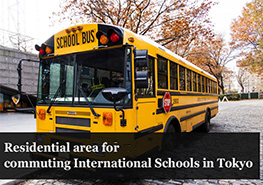 Commuting to International Schools in Tokyo

Here are locations and access information for major international schools as well as residential areas that are convenient for commuting to each of the schools.

For those in Japan, you may be trying to decide if your child should attend a Japanese school or an international school. Our guide to Japan’s education system will help you choose what type of school is best for your child or at the very least satisfy your curiosity.

Deciding to enroll your child in a public Japanese school may be a bit scary at first but is a great opportunity to have your child immerse themselves in Japanese culture. Here is a list with all of Tokyo’s school districts and the types of language support they offer. 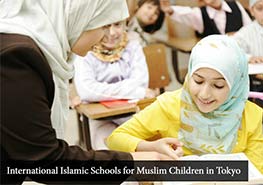 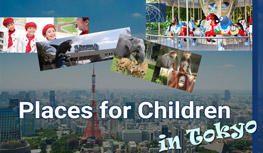 Fun Places for Children in Tokyo

Tokyo is dotted with lots of great parks, amusement parks, zoos, and other kid-friendly places for you and your kids to spend a day or an afternoon. Here are some places to go for a fun and sometimes educational day.

A List of English-speaking Japanese Language Schools in Tokyo