What to Know about Japanese Noodles and Etiquette

When talking about Japanese cuisine, it is inevitable that noodles will enter the discussion at some point. As one of the staple foods of Japan, noodles have been served for hundreds of years in a variety of different ways. Over time, a range of noodle types have developed along with customs and etiquette to accompany them. There are countless regional variations of noodles, but they can generally be grouped into a few broad categories. Keep reading to find out more about the types of noodles and etiquette that should be observed when eating out in Japan. 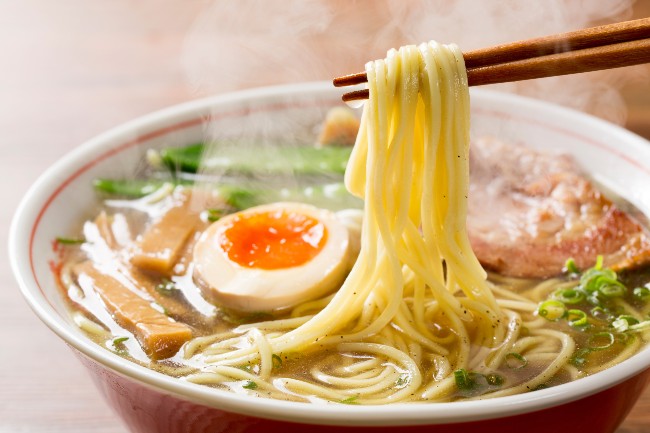 Ramen is perhaps the most well-known type of Japanese noodle, but is also the most recent addition. Ramen became popular in the early 20th century and is based on Chinese wheat noodles. It is cooked with alkaline water, which gives it its famous yellow color.

Ramen noodles can vary slightly in terms of thickness and softness but the real difference in regional ramen comes down to the broth. The original and most common type of ramen is “shio ramen” or salt-based ramen. However, the most popular type of ramen is “tonkotsu ramen,” a pork-bone broth originating in Fukuoka. Tonkotsu ramen is often praised for its rich flavor; thick, white broth; and depth of taste. Other common variations include “shoyu ramen,” a soy sauce-based broth, and “miso ramen,” which is made using miso paste. As its popularity has spread throughout the world, ramen is now a must-try dish for many visitors to Japan. 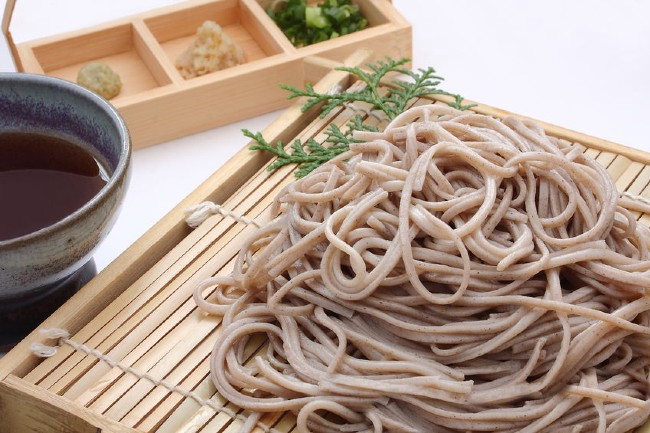 Soba is another of the most common noodles in Japan. Traditionally it was made entirely with buckwheat, although nowadays regular wheat flour is often mixed in. The buckwheat gives soba its darker brown color and earthy flavor. It is also considered one of the healthiest varieties of noodle, again due its buckwheat content.

Soba is used in a wide range of Japanese dishes, both hot and cold. It is popular in summer, due to the number of cold dishes that use the noodle. Soba is also a traditional food for New Year’s Eve, with the idea that it is an auspicious food. The long noodles represent longevity of life, the strong buckwheat they are made from represents resilience, and the brittle nature of full buckwheat noodles represents breaking away from any hardships of the previous year. 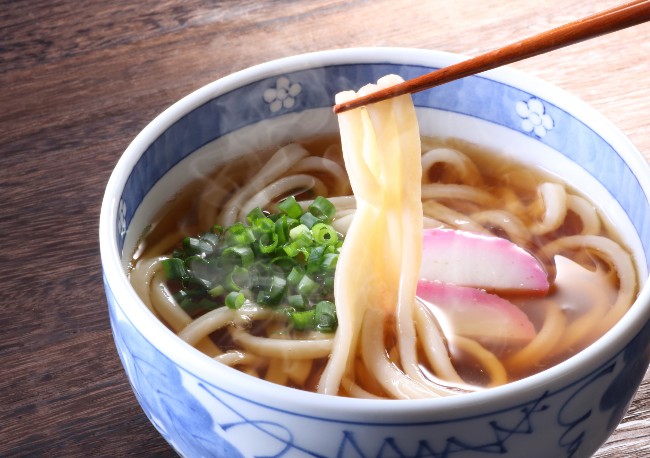 Udon, the third of the top three noodle types in Japan, differs greatly from the previous two. While it is simply made with wheat flour and salt water, the texture and appearance of udon is significantly different. Udon noodles are quite thick, and have a chewy texture, leaning closer to the “mochi-mochi” or chewy and glutinous texture that is often favored in traditional Japanese cuisine. They tend to have a glossy, white appearance and stand out in any dish. Udon noodles have a neutral flavor, allowing them to be paired with a wide range of sauces, soups, and toppings. 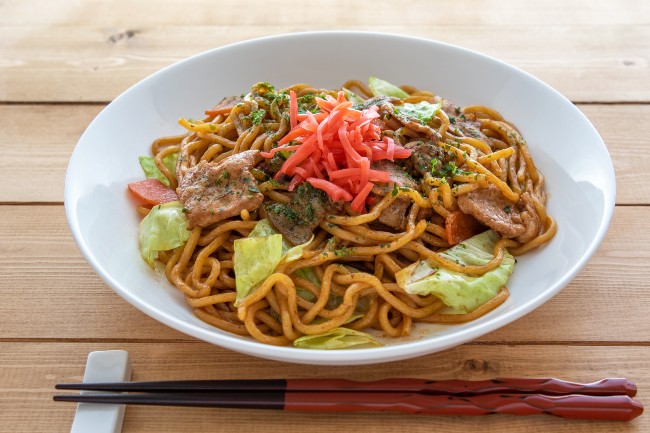 Despite having “soba” in the name, yakisoba is not made with buckwheat noodles. Yakisoba is also a fairly recent inclusion to Japanese cuisine, having only taken off over the last hundred years or so. This type of dish is characterized as a fried noodle mixed with sauce, vegetables, and meat. It is similar to a stir fry and is said to have originated in China. Yakisoba generally uses a lot of strong flavors. It is also sometimes served as “yakisoba pan,” where the yakisoba is served in bread similar to a hot dog bun. This is commonly found in convenience stores, as well as more up-scale bread shops. 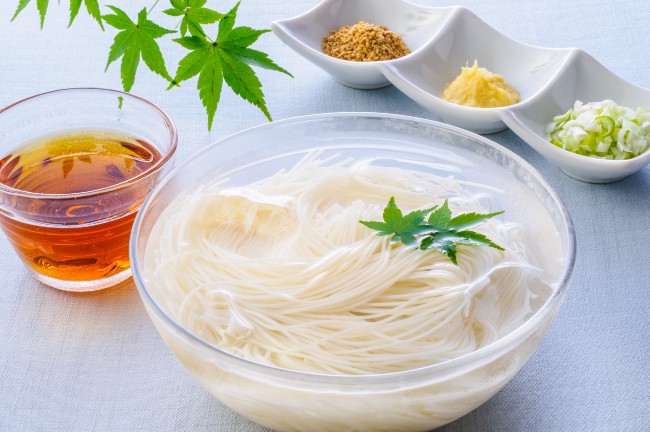 Somen are noodles that are made and cooked similarly to udon but are much thinner and less chewy. It is one of the most basic styles of Japanese noodles, which allows for a lot of flexibility in how it is cooked and what it is served with. Somen is commonly said to have originated in Nara, and some areas still use completely traditional methods of making and kneading the dough for the noodles. This kneading process makes them stronger and springier than some other noodle types.

Hiyamugi is a thin wheat flour noodle, almost identical to somen. It is slightly thicker than somen, but not as thick as udon. As a kind of middle ground, hiyamugi is quite flexible in how it is prepared and served. It is made slightly differently to somen in that the noodles are sliced with a knife while somen noodles are stretched. Hiyamugi is most commonly served in the same or similar ways as somen.

Kishimen is a famous specialty of Nagoya and restaurants in the area are very proud of their kishimen dishes. It is similar to udon but is flat, a very uncommon feature in Japanese noodles. This flat shape changes the texture and mouth-feel from the more traditional udon. Kishimen is often served with a white (salt-based) or red (soy sauce-based) broth and fried chicken (or other fried foods). Vegetables, tofu, bonito flakes, and the like are also often included. 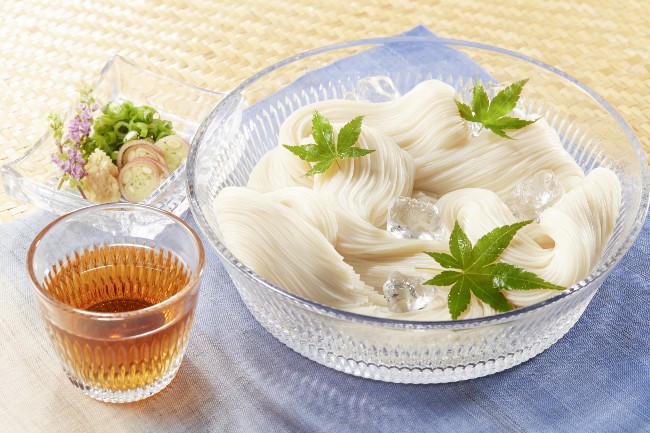 Summer in Japan is very hot and humid, but the weather is no reason to stop enjoying noodles. There are a range of cold noodle variations, and most noodle types can be enjoyed cold. However, somen and hiyamugi are the most common. Cold noodles are often served with tsuyu, a noodle dipping sauce made with dashi and soy sauce. It is thick and rich with a strong umami flavor.

To build upon this, summer is the time of “nagashi somen,” or “flowing somen.” A structure of long, open bamboo stalks is made with cool water flowing along the inside of the bamboo. Noodles are sent down the flume and follow the flow of water until someone catches and retrieves them to eat with their chopsticks. This does require some chopstick skills, but it is a fun activity to participate in with friends or family. There are also restaurants that offer nagashi somen dining. 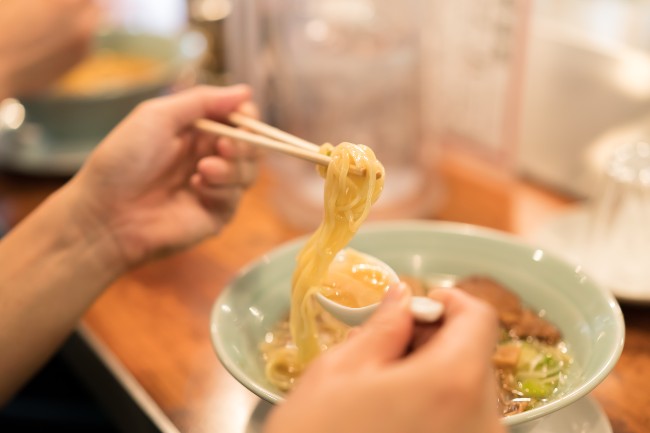 As with most activities in Japan, there are some basic etiquette guidelines to follow when eating at a restaurant serving noodles.

Many noodle shops are small businesses. If you are coming in a large group, you may get broken up into smaller groups to fit the seating in the restaurant.

Don’t take up too much room

It is important to not take up extra room with bags, coats, umbrellas, etc. Many restaurants provide a box under the chairs or tables for bags so seats or space between tables isn’t taken up with someone’s personal belongings.

Taste your food before adding anything

Restaurants often provide spices or condiments at the table, but it is important to not use these until you have at least tasted the broth as it is. To use them immediately is to say you don’t believe the chef knows how to cook.

You don’t need to slurp

Contrary to common belief, it is not necessary to slurp your noodles to show compliments to the chef. It is common to slurp noodles in Japan, but there is no issue with not doing so. It comes down to personal choice.

Leave once you are done eating

While it can be a great experience eating in a noodle shop, that type of business is typically designed for fast customer turnover and so they need customers to leave after they are finished rather than waiting around for the food to digest.

If you accidentally go against one of these etiquette rules, you probably won’t get in trouble. There might be some stares, but people do understand that international customers might not know all of the unspoken rules.

Noodles have been a staple of Japanese food for centuries, so there are many different dishes incorporating them with thousands of restaurants specializing in various noodle dishes, including regional varieties, all across Japan. However, it is also possible to buy many noodle types from specialty stores and Japanese supermarkets. Trying out different noodle is a great way to experience food culture in Japan.

For more about eating in Japan, from restaurant etiquette to food allergies and recipe resources, be sure to bookmark our Japanese living guides for expats!