On September 19th, the Ministry of Land, Infrastructure, Transport and Tourism announced the standard land prices for their selected points nationwide. On the same day, the Tokyo Metropolitan Government also announced the land prices of their selected locations in Tokyo. The standard land price (*later explained in more detail) refers to the price of land per 1 square meter for selected locations as of the 1st of July each year.

For Commercial Areas, the average increase is 6.8%. This increase is mostly based on a significant price increase in the areas attracting foreign visitors, such as Asakusa and Taito-ku. In these areas, the construction of new hotels is currently planned. In the areas of Toranomon and Minato-ku, large scale redevelopment work is on-going. Since last year, in Residential Areas, the price rise trend has continued to spread out into the suburban wards.

The highest price increase to be recorded this year was an increase of 34.5% for 1-chome, Asakusa, Taito-ku. The 2nd highest increase recorded this year was an increase of 31.1% for 2-chome, Nishi-Asakusa, showing an increase of the Asakusa area in Taito-ku is outstanding. According to the Tokyo Metropolitan Government, this is the first time in 12 years (since 2007) that the increase has gone over 30% in Tokyo. It has been observed that the increase can attributed to a strong demand in the sale of goods and lodging due to many foreign tourists, and from the on-going construction of new hotels within the area. The 3rd to 5th highest increases recorded this year are attributed to ongoing redevelopment such as the large-scale renovation of the Shinjuku Sumitomo Building in Nishi-Shinjuku as well as large-scale redevelopment in the Toranomon-Azabudai area and the area around Shibuya Station.

The price increase average within Tokyo is 2.5%, which is a 0.1% increase from the previous year (2018). The results from this year’s survey shows that 3 of central Tokyo’s wards (Chiyoda, Chuo, and Minato) have dropped out of the Top 10 ranking of average price increases in Tokyo this year. It also shows that the land prices within Central Tokyo have just about peaked as the increase in prices is continuing to slow down. In contrast, in the outskirts of Tokyo, where there is convenient transportation access, land prices are expected to continue increasing.

The average standard land price for Residential Areas in Tokyo has continued to increase for the past 7 consecutive years. However, there is variation in the rate at which some of the residential area’s land prices are increasing. The increase in the average price for all wards has gone up from 4.3% to 4.6%. The highest increase in price for residential areas this year was 8.6% in Arakawa-ku (8.7% in 2018), followed by 7.9% in Toshima-ku, and 7.6% in Taito-ku.

In Central Tokyo the price of condos has almost plateaued, indicating that the inflation of land price is slowing down. In the suburbs, with convenient transportation access, the land price has shown further inflation. As a result of there being more inflation of the land price in the suburbs, no piece of land in the central wards has made it into the Top 10 price rise ranking this year. However it should be noted that 5 central wards have seen a 5.2% average increase in land price inflation (from 2018). Other wards have seen 4.5% the same average increase.

One of noteworthy point about this year’s standard land prices (as of July 1st) announced by the Ministry of Land, Infrastructure and Transport, is that the national land price average for all types of land usage have shown a rise of 0.4% (from 2018), which is the 2nd consecutive year it has risen (It rose for the first time in 27 years last year). Another point is that the land price average for commercial areas in provincial areas have shown a 0.3% rise, which is the first rise in 28 years since the year 1991.

It has been observed that 2 major factors have contributed to the upward trend in land prices. One of them is that major urban areas that attract many foreign tourists and have active demands in redevelopment, are contributing to the rise. The second is that the Japanese government has maintained an ultra-low interest policy to support the investment of institutional investors and the business companies, contributing to the land price rise in the commercial areas nationwide and also contributing to house acquisition and the recovery of the land price rise in the residential areas nationwide.

About the residential area in Tokyo, it has been observed that more and more home buyers are paying attention to cost-effectiveness comparisons. The areas which have shown the highest rise of land prices are those in the suburban wards. These areas are convenient for transportation but have relatively low land prices. Looking over Tokyo’s 23 wards, the most significant increase in land price can be seen in the suburban wards of Arakawa-ku, Toshima-ku, and Taito-ku.

The land price rise in Asakusa’s Commercial Areas stand out amongst the other wards. Residential areas in the suburban wards are continuously rising in price.

(Source for data: Bureau of Finance *Round off to one decimal place）

*What is the Standard Land Price?

The standard land price is the price of land per 1 square meter and is calculated for each selected point of land as of the 1st of July each year. The Prefectural Governments are responsible for its survey and the Ministry of Land, Infrastructure, Transport and Tourism release the nationwide results. It is one of the two major representative data that shows the fluctuation of land price along with the official land price that is announced on Jan.1 every year. 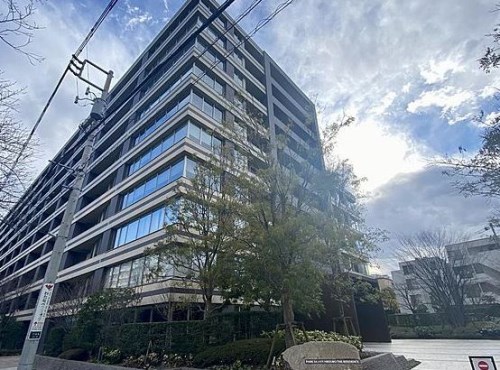 Located within walking distance to JR Meguro Station, it is a 10-story large-scale condominium apartment with 237 units in total that stands in a quiet residential area along Meguro River with seasonal scenic beauty. Abundant green and trees are nicely arranged in the premises and a spacious stone-paved approach leads you to the modern-designed entrance. The entrance hall connects a courtyard in the center of the building creating a large open space. Trees and water garden is arranged in the courtyard having plenty of sunlight flowing into the entrance hall. Various shared services include concierge service, 24hours garbage disposal, and car-sharing and rental bicycle service. Dwelling units are 1LDK?3LDK for various lifestyles and family plans. Full range of the latest room equipment and solid security system support and protect your everyday life for making your calm and peaceful city life possible. 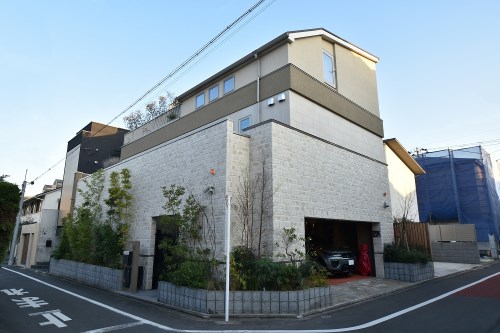 Located on a hilltop of "6 chome, Shimo Meguro, Meguro-ku", within Category 1 exclusively low-rise residential zone. The area is a quiet residential town close to "Rinshinomori Park" having good living environment with lush greenery. It also close to so-called Meguro Interior Street (Meguro-dori Ave.) lined with stylish cafes and restaurants, antique furniture shops, etc. adding vigor to the residents' everyday life in the neighborhood. The house with an open ceiling space (completed in Dec.2017) was built by the owner with careful attention to the layout design creating connection of vertical space as well as an open feeling. It also comes with outdoor spaces such as a rooftop terrace, a roof balcony, etc. Please visit and see the house. 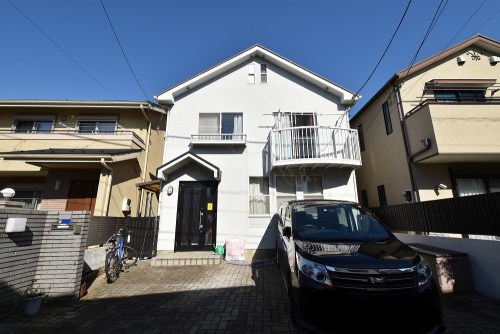 Land of 148.85sq.m (including the setback area of 1.43sq.m) in 1-chome, Funabashi, Setagaya-ku is on sale now. It lies facing the south side road, having plenty of sunlight. It is located within a 8-min walk of Chitose-Funabashi Station on Odakyu Line, where semi-express trains stop. Around the station there is "Odakyu Marche 1,2" which has restaurants, a convenience store, a book store, a clinic, etc. There are also various supermarkets such as Odakyu OX and Ozeki in the neighborhood. In addition, there are two recommended spots, firstly super large-size UNIQLO shop (Setagaya Chitosedai branch), and secondly Natural Hot Spring SPA Seijyo no yu, located approx. 10 minutes walking distance respectively. The area in a good living environment with lush greenery having "Funabashi 2 chome Park" and "Funabashi Hiroba". Semi-express and express trains of Odakyu Line connect to Metro Chiyoda Line making direct access possible to Central Tokyo such as Otemachi and Omotesando. It is the land without building conditions, so you can choose any favorite house builder. There is an existing house (completion in 1975, 6LDK, history of extention, building floor area after extension is 123.15sq.m) built in the land, so you can consider to live in it. 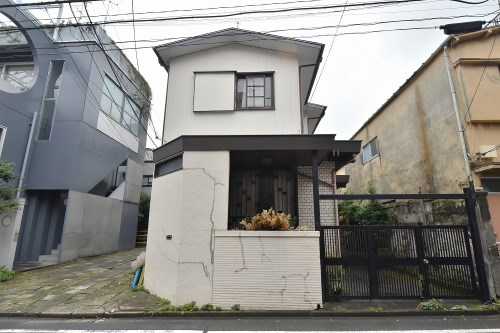 It is located on the hill top in 3-chome, Minami-Azabu, having lush greenery of nearby Arisugawanomiya Memorial Park and Azabu Undojo, and various cultural facilities close by including Tokyo Metropolitan Central Library. The embassies of various countries, international schools, and international stores including National Azabu Supermarket are dotted in the neighborhood providing an exotic atmosphere. The land is a corner location facing south-west and north-west, having plenty of sunlight. It is belong to the area which is designated as Neighborhood commercial zone of Land Use Zones (allowed for Maximum building coverage ratio of 80%, Maximum floor-area ratio of 300%). There is an existing old house built in the land, but you can have your favorite building plan on it. 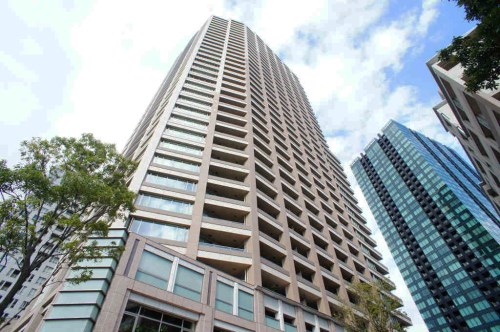 It is one of the Park Court branded luxury condominium apartments sold by Mitsui Fudosan Residential Co.,Ltd. Completed by Taisei Corporation. It is surrounded by busy and active Roppongi area, urban constructions such as Tokyo Tower and Tokyo Midtown, and rich nature of Arisugawa-no-miya Memorial Park within a walking distance. Hotel-like front desk services and common facilities such as guest rooms and various lounges are attractive. The dwelling units are mostly from 1LDK to 3LDK having 440 units in total. There are many embassies in the neighborhood giving very international atmosphere to the area. Azabujuban Shopping Street, where many old and modern stores are coexisting along sophisticated townscape, is within a living area. Supermarkets are close and support everyday life in the area. The refined locality and nicely designed facility give it the impression of Mansion House beyond the ordinary condo image making high quality urban life possible. 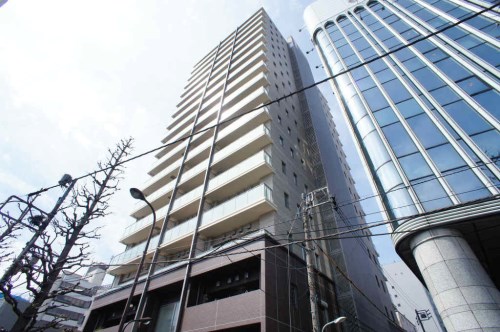 The property is a condominium apartment on a hilltop very close to "the Iikura-Katamachi intersection"; which is in a four min. walk from the Roppongi intersection. It is located higher than Tokyo Midtown and Izumi Garden so that it gets outstanding open view including Tokyo Tower. It offers flexible floor plans that can be adapted to changes of life stage from single persons' use to family use. The interior design is simple and elegant. It offers high quality living space where anyone can live comfortably.