Funerals are always a difficult time. Unfortunately, such occurrences are an inevitable part of life in Japan just like everywhere else.

Nearly all Japanese funerals, or Ososhiki, are conducted Buddhist-style, regardless of what religion the family practices. Also, almost all involve cremation, to the point that even the local government sometimes bans traditional burials.

In case you are invited to attend a Japanese funeral, below is a brief description of the various events involved, along with some essential Japanese funeral etiquette for before, during and even after the event.

The Otsuya is very similar to the wake ceremony in many Western countries and is a time when family, relatives, and close friends gather to say their goodbyes to the dead. In this ceremony, the bereaved gather and spend a period of time in the same location as the body of the departed. Many times, a Buddhist priest will chant what is a called sutra while the family and relatives will offer incense at an incense urn in front of the body of the deceased.

In recent years, the traditions around Otsuya have changed such that those individuals who cannot make it to the actual funeral ceremony can stop by and give their condolences. Be sure to check with the bereaved ahead of time if you do this. When this type of Otsuya is occurring, the start and end times are usually announced and typically begin at 6 or 7PM and last for 1-2 hours.

In very close relationships, people often attend both Otsuya and Ososhiki, but an increasing number of people attend only one of the two. In some regions, Otsuya may be attended only by relatives or very close friends, so it is advisable to check with the funeral information letter or the bereaved family whether it is acceptable to attend the Otsuya.

If you attend both Otsuya and the Ososhiki, you should only give the 'okoden' (which will be explained later), at the Otsuya as giving it twice is considered bad luck due to the word 'overlap', so please be aware of this.

The Ososhiki is the actual Japanese funeral service, and contains several ceremonies. It starts one day after the Otsuya with a Sougi or Soshiki, which is the funeral ceremony itself. It follows a similar procedure to the Otsuya, with a priest chanting a sutra and the bereaved burning incense. After the Sougi, there is a Kokubetsushiki, or memorial ceremony, where the friends and acquaintances of the bereaved pay their respects to the dead and offer condolences to the family. Lastly, there is a cremation ceremony. After the body has been cremated, the family uses chopsticks to pick the bones out of the ash and place them in a burial urn which is then interred inside the family grave.

What to Wear at Otsuya

For Otsuya, attendees do not have to wear mourning clothes. The opening of the Otsuya is usually in the evening, and people may arrive after work, so there is no problem with plain clothes. However, avoid flashy clothes and, if possible, wear subdued colors such as black or grey.

Japanese mourning clothes (kimonos) are worn by the widow or other relatives close to the deceased and should not be worn by attendees.

Students wear their school uniform. Bare feet are not permitted therefore do not forget socks (black, white or navy blue).

What to Wear at a Japanese Funeral (Ososhiki) 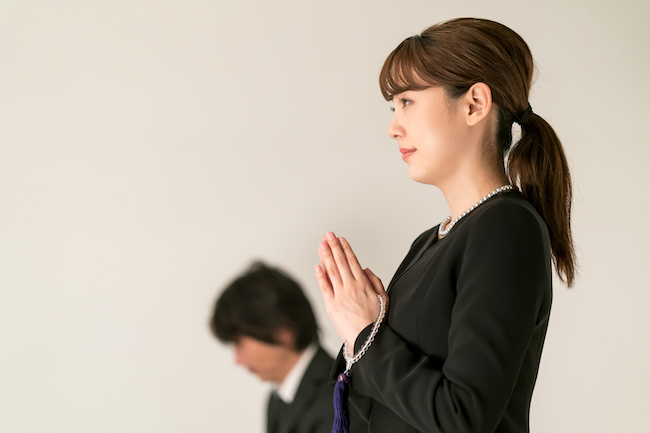 Black is the color of mourning in Japan. While in the recent years dark blue and dark gray is becoming more acceptable, black is still preferred over all other colors. It can’t be stressed enough that you must never attend a Japanese funeral without the appropriate attire—to do so would be the ultimate sign of disrespect.

- While a black tie is trickier to find, but it is generally available at department stores, supermarkets, and even 100 yen shops and train station kiosks.

What to Bring to a Japanese Funeral

- Okoden is a money offering, in this case condolence money, which is typically given to the bereaved by guests at Japanese funerals. The amount will generally be from 3,000yen to 30,000yen, depending on the relationship to the deceased, the social and financial status of the mourner and the bereaved family. Use your judgment here, but never, ever use crisp new bills, as doing so signifies that you expected the death and thus had time to get new ones. Moreover, never present the money without the proper envelope (goreizen, see below).

Some people also write their name and the amount of money enclosed outside the envelope, and while this it is not good practice according to some, it is actually better to do this as this helps the bereaved family keep track of the offerings.

If you are unable to attend the Otsuya nor Soshiki for any reason, inform the bereaved family why. You can also send okoden by post (registered cash envelope). Condolence flowers or offerings may be considered inappropriate, and this may be stated on the funeral invitation.

- Okoden typically refers to the concept of money gifts, so there are actually many types of okoden envelopes available at all stationery stores. When asking the store clerk, it is better to mention that it is for a funeral, or simply to ask for the kind of envelope you need, called a "goreizen（ご霊前）." Do not get a "gobutsuzen（御仏前）" envelope, as this is used for after a person has been cremated.

Upon arriving, you will be greeted by the family members. Make sure that your okoden is out of sight at this point. Never give your money offering directly to the bereaved family. After paying your respects, please refrain from talking to them throughout the remainder of the ceremony.

The following are general phrases to offer condolences at a Japanese funeral or wake:

- Goshuushou-sama desu (You must be grieving terribly): This can be used no matter your relationship to the person.

- O-kuyami moushiagemasu (I offer my condolences): This can be used in writing as well.

After you have greeted the family, someone in this reception area will ask that you write your name in a registry. At this point you put your okoden in the appropriate tray, usually sorted by category. Then you will be ushered into the room and to your seat. Seats closest to the front are reserved for the immediate family. After everyone is seated, the Buddhist priest then starts his chant. Remember that many of the rituals in the wake and funeral are quite similar, and if you are unsure of what to do, follow those around you, or ask close colleagues and friends.

There are two types of incense that you are likely to encounter: Makko (Incense Powder) or Senko (Incense Sticks)

How to Use Makko

How to Use Senko

Pick up the incense using your right hand and light it with the candle. The number of senko may number 1-3, depending on the religious sect. Use your left hand to put out the flame, being very careful never to blow it out.

Place it in the incense burner. Again, depending on the religious sect, the incense will either be laid down or set standing up. Place your senko slightly apart from others and toward the rear section, both to prevent smoke from clouding together and also so that attendees following you will have enough space to place their incense.

Again, if you are unsure of what to do, follow those around you.

At the end of the ceremony, towels or other gifts will be given to the guests as an Okoden's return when they leave. The final cremation is attended in most cases only by relatives and other close relations. Since ancient times in Japan, the word 'defilement' has been used to refer to death and disease, and salt is believed to have the effect of purifying these, so those who place 'morishio (piled salt)' at the entrance to their homes are hoping to prevent defilement and impurity from entering their homes.

After the ceremony, purifying salt may be given to the guests. This is because it is believed that purification with salt has the effect of purifying the body of impurities and impurity towards death. Originally, purification was performed to purge death of impurities in the ancient Japanese Shinto tradition, based on the idea that death is an impurity.

Buddhism does not consider death as an impurity however purification is performed at Buddhist funerals as a customary practice handed down in Japan. An increasing number of regions and religious denominations are discontinuing the distribution of purifying salt.

How to use purifying salt

Purifying salt is sprinkled on the body when returning home from a funeral, before entering the house. If you are not going home immediately after the funeral because you are stopping off somewhere else, you can use the purifying salt as soon as you leave the funeral hall.

Generally, the correct way to use the salt is to sprinkle it on the chest, back and feet in that order. This order is the same as the order in which the blood flows, and is meant to prevent evil spirits from flowing into the body as the blood circulates.

After sprinkling the purifying salt, brush off any salt remaining on your clothes with your hands. In this way, you can rid your body of evil spirits. Finally, step on the salt that has fallen down on the ground. It is said that by doing this, you can completely cut off the evil spirit.

We Hope you Find These Japanese Funeral Guidelines Useful

Please keep in mind that the above notes are only general guidelines on Japanese funeral ceremonies. If you have specific questions about the particulars of a Otsuya or Ososhiki that you are attending, you should check with the host or else a friend or colleague familiar with the deceased who can help with questions of ceremonies or customs.

Places of Worship in Tokyo