Eating Outside in Tokyo: Know the Rules, Avoid a Food Fight

Tokyo is one of the cleanest, most well-kept cities in the world. Despite its staggering population of 15 million, the city consistently tops charts of safest and best places to live on Earth, making it a wonderful place to raise a family, start a business, or invest in property.

With that, however, comes a complicated system of social boundaries that can be difficult for expats to learn. Politeness is a highly valued trait in Japanese society, and it can be a challenge to make sure you’re respecting the culture in which you live. 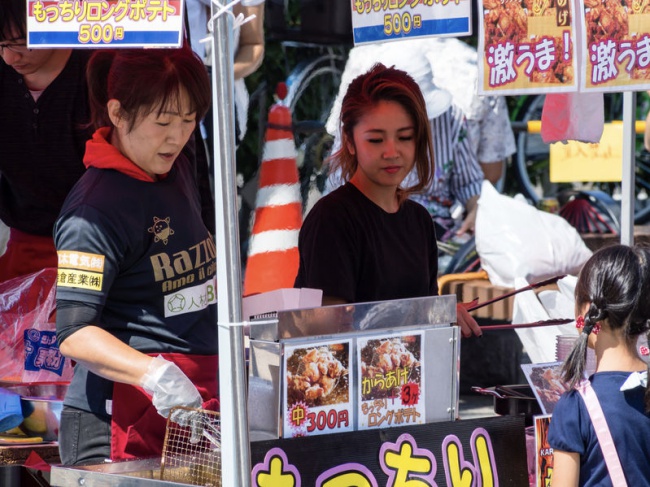 One of the biggest cultural differences that many face is eating in public; strolling down the street with a slice or hopping on the subway with a coffee is a pretty big dame for Tokyoites. While generally the Japanese are polite enough to let non-natives slide, here are some rules to keep from committing any social or cultural faux-pas.

Japan Food Rules for Eating on Trains: Basically, DON’T Do It!

Trains are often the biggest culprit of bad public-eating manners, and a moment in rush hour will help you see why. When you’re crushed suit-to-suit, the space needed to protect a cup of coffee can prevent one more person from riding the train, with sometimes unfortunate effects on the clothing involved.

While you may occasionally see teens or older people eating a sandwich on the train, it’s generally seen as bad manners and can reflect badly on you and the party you’re with. If you are absolutely starving, an onigiri (rice ball) is the best way to go, and eating on the platform itself is acceptable if not ideal. Try to stay away from eating in the actual train as much as possible, especially while sitting next to someone else or standing by the door.

The main exception to this, of course, is Shinkansen or other long distance trains. Eating on Shinkansens (or the slower but equally comfortable “Romance Cars”) is not only allowed, but encouraged. Platforms servicing these types of trains often sell bentos (box lunches) specifically for the journey, and many times a snack trolley or vending machine will be on the train itself.

Even better, a drink or two is totally acceptable on these types of trains, though becoming drunk is definitely still rude. Sometimes a small beer or sake selection is even included in the trolley menu. That being said, a good rule of thumb for whether or not your train encourages consumption is seat assignments–if you need to buy a special assigned-seat ticket for the train, then chances are you’re good to go.

Strong smelling or messy foods, however, are out of the question no matter what kind of train.

For being such a huge city, Tokyo has a surprising selection of green spaces for its citizens to enjoy. These are one of the few places people can let loose and relax in an expansive environment that can sometimes feel miles away from the hustle and bustle of city life.

That being said, however, the one important thing to remember is that not all parks are created equal. Specifically, parks that include temples or shrines would be scandalously rude places to eat. Outside of the temple gates can be grey areas (especially around hanami season when everyone’s drinking and eating outside), but where an expat might see a beautiful place for a picnic lunch might not be so for your average Japanese citizen.

As a general rule, if people are sitting on the grass, then usually food is allowed. Some gated parks do not allow food or drink in the grounds, however, so make sure you’re paying attention to all posted signage in the area you’re in.

As previously mentioned, the big exception to this is the 2-3 weeks of hanami, where enjoying the cherry blossoms becomes the national pastime. This is one of the only times you’ll see people outside, feasting on barbecue and knocking back beers while sprawled on tarps and blankets. It’s not uncommon to see off-duty construction workers or security guards sitting on the curb with a cup of sake and enjoying the pleasures of the blossoms.

Eating on the Street in Japan: Look for Designated Areas

Yatai stalls, or food carts with a few seats, are also common around late night hubs and shrine areas. One of the last holdouts of old Tokyo, yatai are some of the most interesting and tasty eats you can get. It’s important when at a yatai not to bring food from other stalls or convenience stores, as its considered extremely rude.

Often wiith only five to ten seats, yatai can also be a bit crowded, so it’s best to only go in small groups and make accommodations for other guests looking to enjoy the food. Keep your bags close as well, since yatai are often on sidewalks and can be a hazard to passersby.

Eating and Walking in Japan: Stay Where You Are!

Eating while walking is a big no-no for most Japanese–even children enjoying an ice cream are often told to sit down before consuming food. That being said, summertime sees an explosion of street food stalls, especially during the festival season. Most people will look for places to sit while eating, but if you must stand, try to stay near the stall you bought the food from.

Many tourist areas have become more vigilant about this, as drips and mess from standing and eating have damaged property and goods at surrounding market stalls.

Where Are the Trash Cans in Japan?: What to Do with Your Rubbish

No matter where you eat, its important not to put your rubbish on the ground. Many from outside Japan are surprised by the lack of garbage cans, and while festival food stalls often have places to throw away the garbage from your quick meal, most Japanese expect to take their rubbish home with them and dispose of it properly.

Most vending machines will have little disposal containers attached, but those are for recyclable cans and bottles only, and throwing away regular trash there is not allowed. In a pinch, almost all convenience stores have trash cans and are generally lenient during festival season. Tourist littering has become such a problem that many places have banned eating outside to prevent trash on the ground.

Eat in the Comfort of Your Own Luxury Tokyo Home

All these are important ways to stay culturally savvy in a world of rules, but sometimes you want to be able to kick back and relax in your own space. With Plaza Homes’ extensive list of properties in and around green spaces, you can enjoy the beauty of hanami or the tastes of summer without having to carry home a giant bag of trash at the end of the day.

Worried about your Japanese? No problem! Plaza Homes is dedicated to helping English speakers find that perfect relaxing spot, working as both your translator and realtor to ensure you’re getting the highest quality property at the best price! With over 50 years of experience, Plaza Homes is one of the oldest companies in the business, and have helped countless families and investors find the property that’s right for them.

Open seven days a week, our offices are always open to inquiries and ready to help with a smile! Your new sweet home is just a phone call away!