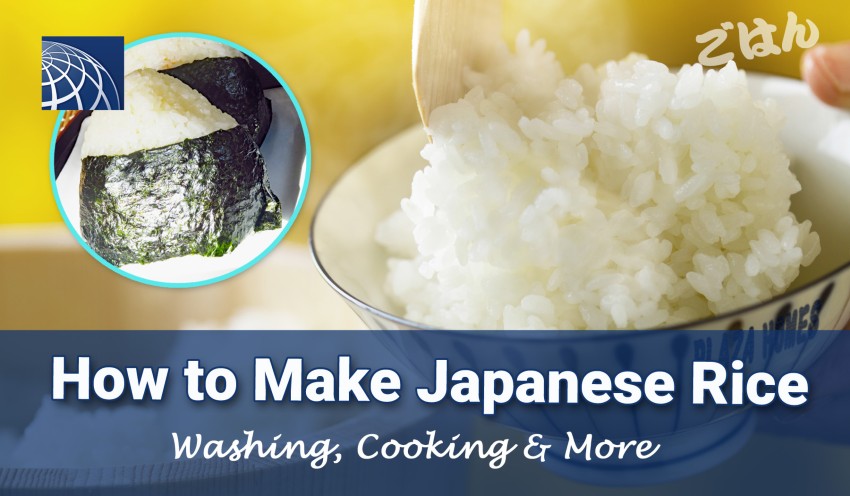 Whether Japanese rice is served as a side or used as an ingredient in a heartwarming Japanese dish, it is one grain you will never get tired of. Keep reading to find out how to measure, prepare, and cook Japanese rice, as well as useful kitchen tools and popular dishes to try.

If you would like to know about how to choose Japanese rice, read What to Know about Japanese Rice: Buying, Storing & More.

How to Measure Japanese Rice 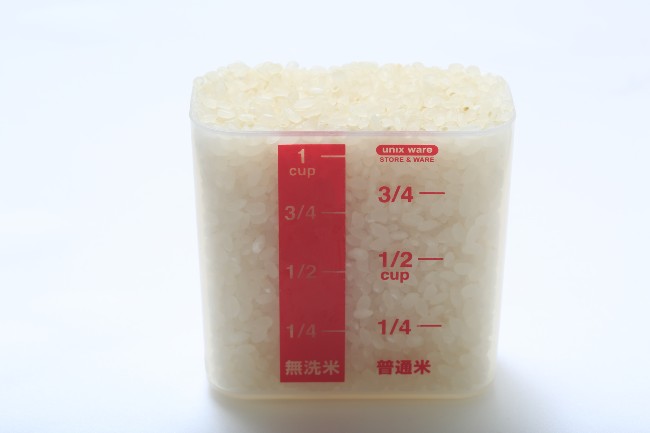 Traditionally, a specific Japanese measurement unit called “go” is used to ensure the right quantity of rice for each meal. One cup of rice weighs about 150 g, or about 180 ml (cc), making it slightly different from the standard 200 ml measuring cups used in Japan. It is okay to use a larger cup when measuring the rice as long as you maintain the 1:1 ratio of rice and water when cooking.

What is more important is that you make consistent, accurate measurements. One method to do this is to scoop out a cup full of rice and then level off the top with chopsticks.

A standard serving of cooked rice is equivalent to about 0.4 cups dried (or 60 g). Thus, a single 180 ml cup of rice will make two servings.

How to Wash Japanese Rice 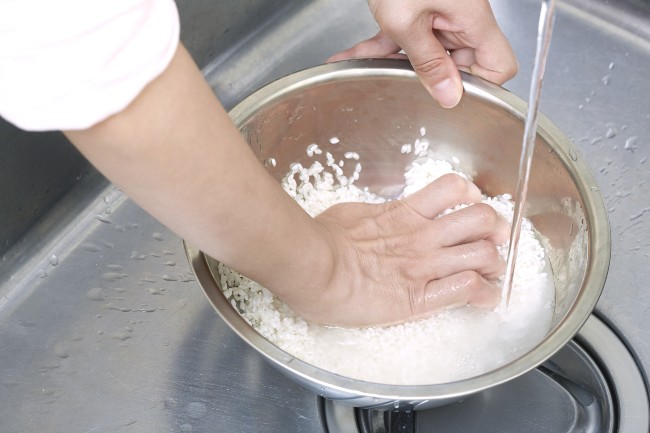 The reason that the rice needs to be washed is to remove dirt, bits of rice bran, and excess starch from the outside of the grains. When you wash the rice, you will notice that the water becomes quite cloudy. If you were to leave this cloudy water in the pot and cook the rice, the water would turn into a gel that would coat the rice, making it too sticky and unappetizing.

To wash the rice, fill a pot or large bowl with water, add the rice and agitate it by hand, and then carefully pour the cloudy water out to avoid losing any of the carefully measured rice grains. Using a strainer isn't necessary but can be helpful. Typically, this process is repeated three to five times, but sometimes up to nine times depending on how cloudy the water is.

How to Cook Japanese Rice

When cooking Japanese rice, the two most common methods are with a rice cooker or on the stove. 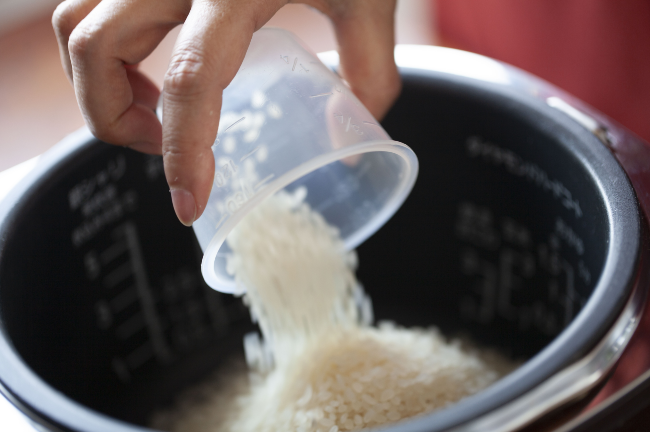 Today’s rice cookers are able to consistently prepare delicious rice. While this appliance isn’t essential for making Japanese rice, its set-it-and-forget-it convenience is too good to pass up for most Japanese households.

1. Use the measuring cup (provided with the cooker) to carefully measure two scoops of rice, and add them to the pot or a strainer.

2. Wash the rice under cold running water while gently mixing it with your hand for 1–2 minutes, or until the water runs clear. Drain well.

5. When ready, open the lid and gently fold the cooked rice with a rice paddle. If you overdo it or are too aggressive, you may make the rice mushy.

Making Japanese Rice on the Stove

You may not get it perfect the first time, but rice is just as easy to make on the stove once you find your rhythm.

1. Use a measuring cup to carefully measure two scoops of rice, and add them to a bowl or pot.

2. Wash the rice under cold running water while gently mixing it with your hand for 1–2 minutes, or until the water runs clear. Drain well.

3. Presoak the rice for 30 minutes by adding it to the pot and pouring in two cups of fresh water (1:1 ratio of rice and water).

4. Bring the water to a boil over high heat with the lid on and let it continue boiling for one minute.

5. Then, reduce the heat to a low simmer and let it steam for 10 minutes with the lid still on.

6. To finish the cooking process, increase the heat back to high for 10 seconds and then turn off the burner.

7. Let the rice rest for 10 more minutes, and be sure not to remove the lid.

8. Using a rice paddle, gently fold the rice a few times. If you overdo it or are too aggressive, you may make the rice mushy. Also, be sure to open the lid away from you to prevent yourself from being burned by the steam.

Be sure to get these handy items to make cooking rice easier.

While it is possible to make delicious rice on the stove, casual cooks tend to get better results using a rice cooker, and have more time to spare for making the rest of the meal.

Rice cookers aren’t too expensive and soon pay for themselves if you use them regularly. Modern models come in a range of sizes, from those designed to cook just a single serving, all the way to units big enough to feed a football team. They also come with various cooking functions that let you do more than simply cook rice. For convenience, most rice cookers include a 180 ml cup as an accessory.

Rice washing bowls are quite large and have small holes or thin slots near the top that keep the rice in while making it easy to drain the water. It is sometimes included as an accessory when buying a rice cooker. You can also use a tool to wash rice like in the right photo.

Western-style cooking spoons tend not to work well when preparing rice dishes. However, a Japanese rice paddle is designed for that purpose. Usually made from plastic, wood, or bamboo, it makes mixing and serving the rice effortless. Often, one is included as an accessory when buying a rice cooker.

How to Store Leftover Rice

Uncooked rice doesn’t last as long as you might think. Many Japanese store it in the refrigerator or freezer. The key is to store the rice somewhere cool, dry, and protected from insects and where it won’t be contaminated or come in contact with other foods or substances.

If you decide to freeze cooked rice, which is the best way to keep the original fluffy texture, divide it into individual portions before freezing. Plastic storage containers with sealing lids are the best option. Frozen rice can be stored for about one month and can be reheated in the microwave.

If you find that the cooked rice has dried out a bit either in the fridge or because you forgot to put it away the night before, there are many Japanese recipes where stale rice is preferred — so don’t throw it out!

Japanese rice is integral to a wide variety of dishes. Here are some of the most popular in Japan. Some are side dishes, while others make up an entire meal.

A bowl of Japanese rice, the foundation of the Japanese diet, pairs perfectly with miso soup and Japanese-style pickles for a light breakfast or lunch.

Rice cakes are typically made from steamed glutinous rice that is then pounded with a large mortar and pestle or with an electric mochi cooker. Although best known for being served as part of dinner on New Year’s Eve, rice cakes are eaten all year round in Japan. They may be served fresh, grilled, fried, or in soups.

Often wrapped in seaweed (nori), palm-size rice balls are simply seasoned with salt in their most basic form. They often contain fillings such as Japanese pickled plum (umeboshi) or sweetened kelp (kombu).

Regarded as a Japanese comfort food, rice soup is a great way to use up leftovers that have gone a bit stale. Simply add a serving of day-old rice to a bowl, pour in hot water or green tea, and add a little powdered dashi. Typical toppings include pickled fruits or vegetables, Japanese salmon flakes, seaweed, or raw fish. It is often served at the end of a meal and is particularly popular during winter.

Similar to other grain porridges, the rice is cooked slowly with an ample amount of water. It is a great way to use up leftover rice and is often topped with a single pickled plum. If you have breakfast at a traditional Japanese inn, there is a high likelihood you will encounter okayu. It is also a popular dish for elderly and sick people since it is relatively easy to digest.

Perhaps the one type of Japanese food that doesn’t need any introduction, sushi usually consists of vinegared Japanese white rice that has been gently molded into a shape and combined with one or more cuts of raw fish. Sushi comes in various forms, including the type formed by hand (nigiri) and those made into rolls (maki).

Fried rice was originally brought over from China. It is available in seemingly infinite varieties and is often made from leftover rice and other ingredients. The dish is typically stir-fried and can be cooked in a wok. The differences between Japanese and Chinese fried rice are usually found in the types of rice and accompanying ingredients used.

Rice crackers are made from rice flour that is formed into a number of different shapes, baked or grilled, and then brushed with either a savory or sweet coating. As with every part of Japanese cuisine, making senbei is quite an art form. The savory crackers are often enjoyed with alcohol, such as sake or beer, whereas the sweeter versions are often regarded as an ideal accompaniment to green tea.

Traditional Japanese sweets called wagashi may be simple in taste but the sculpted culinary art form is definitely something to admire. Using a base of rice flour and pounded mochi rice, confectioners deftly sculpt each sweet often with a filling of sweetened adzuki beans.

In cities such as Kyoto, you will find specialty shops that have been making and selling a wide variety of exquisitely presented sweets for generations. They make ideal souvenirs, but take close note of their use-by dates.

Make Japanese Rice a Part of Your Home Menu

Rice holds a special place in the hearts of Japanese people for good reason. It is versatile, easy to make, and nutritious. If you would like to add it to your culinary repertoire, be sure to read through our guide to buying Japanese rice . And for more information on food, recipes, and dining in Japan, bookmark our Tokyo expat blog!