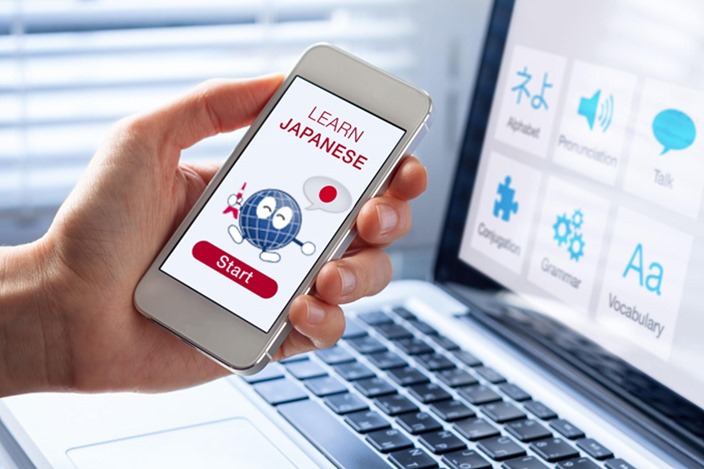 Whether you are studying at home or newly arrived in the country, the Japanese language can seem impossible to those just starting to learn it. That said, there's one simple way to survive no matter how little time you have: All you need is a smartphone and a couple of apps to help you memorize vocabulary, write kanji or understand grammar. With a few of these in your pocket you can simply pull out your phone whenever you're on the train, waiting for an appointment or find yourself unable to understand something, and before long you'll be learning the lingo. There's a range of free language applications for every level and purpose - here are eight of the best Japanese learning apps to get you started.

Japanese Dictionary Apps to Use Offline

Imiwa? is a multilingual Japanese dictionary, this app can be used without internet connection. Search methods include SKIP (which organizes kanji based on pattern rather than radical) as well as being able to search by radical, romaji, hiragana or katakana, although it has no handwriting function. There is an excellent sentence database plus JLPT vocabulary lists and verb conjugation charts. Plus, you can favorite items for individual study. 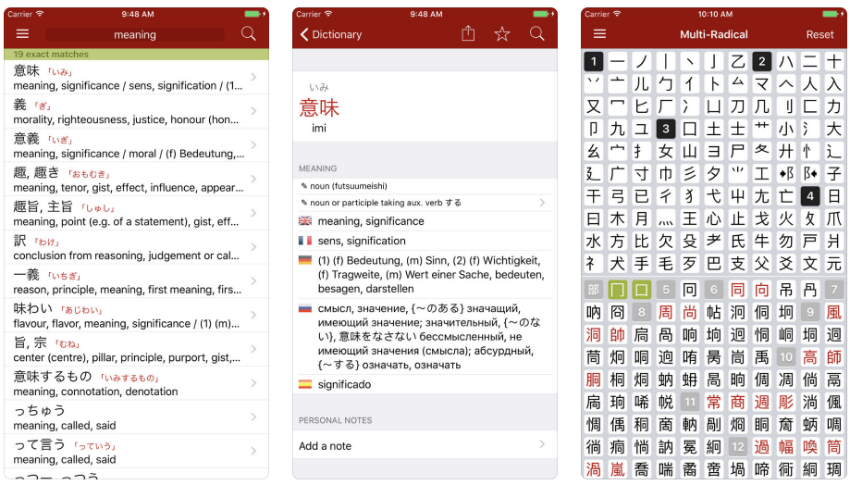 Midori is a Japanese-English, English-Japanese dictionary. It's for those who feel up to tackling the challenge of kanji, this offline dictionary has a broad range of features and a huge database of 12,000 kanji (half with stroke order displayed) and hundreds of thousands of words, including place, product and company names. There are several ways to look up words, including by handwriting or wildcard. Example sentences put the words in context, and there is an audio feature for correct pronunciation. You can create your own bookmarks to form flashcards, or study the pre-existing lists that include all JLPT (Japanese Language Proficiency Test) levels and use SRS (spaced repetition system). Takoboto is an offline Japanese-English, English-Japanese dictionary and also a learning tool. There are example sentences, conjugated forms for each word and kanji information. You can search words in kana. kanji, romaji or alphabets. 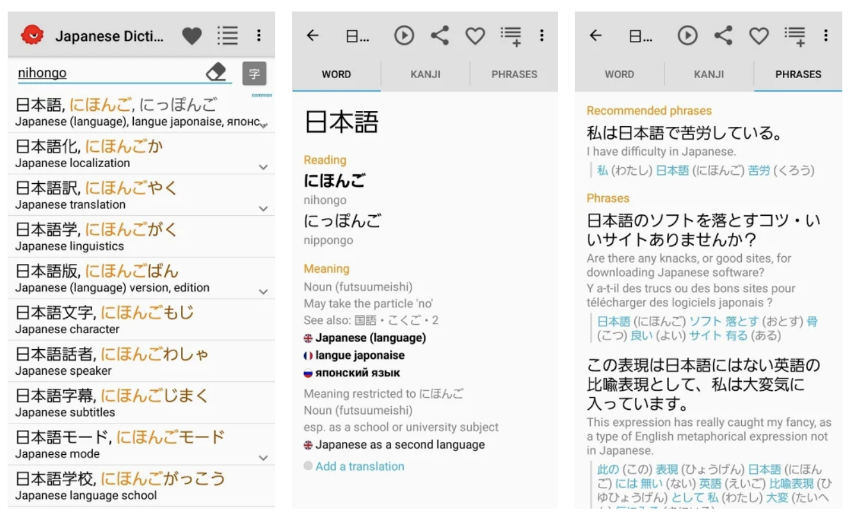 Jsho is an offline dictionary which is very easy to use and it has a range of functions. For instance, you can enter a sentence and it will identify and translate each individual word. It also displays correct kanji stroke order, allows you to filter results by noun, verb, adjective, etc., and has flexible search methods, such as by radical or stroke, or using the wildcard function that lets you search for a word when you can only remember part of it. If you are an Ankiweb user (below), Jsho also allows you to add any entry to your Anki flashcards. 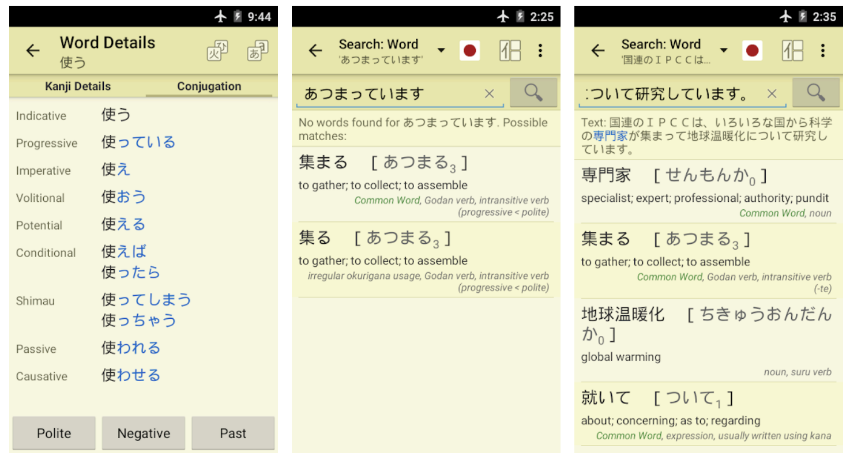 Yomiwa is an offline Japanese dictionary that includes many features to help you read and learn Japanese. It is available for iOS and for Android. 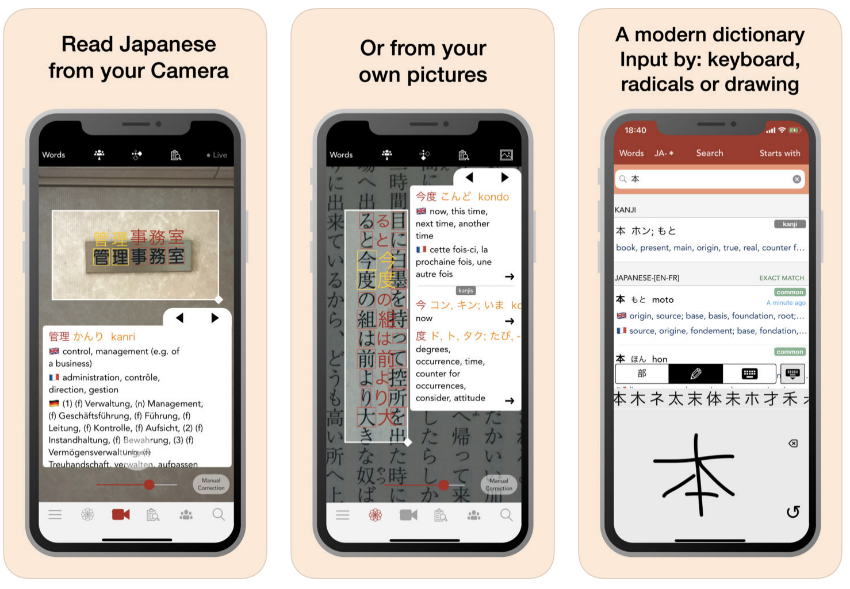 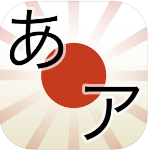 Nihongo no Kana teaches you how to master Hiragana and Katakana syllabaries quickly. With Skritter you can master thousand of Japanese Kanji, you can practice writing characters on the screen, this app has a handwriting recognition with instant feedback. It's also possible to study offline. 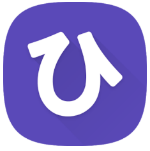 Hiragana Pro is a simple Hiragana learning app for Android. 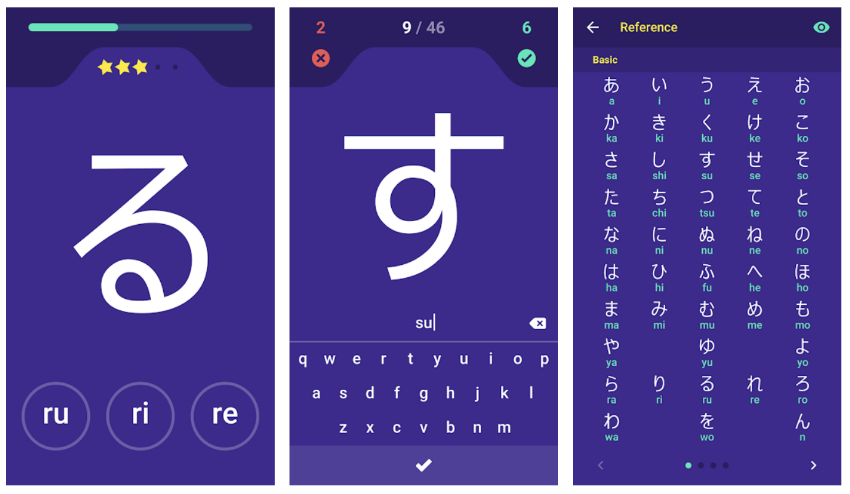 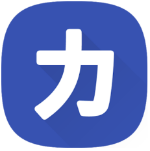 Katakana Pro is a simple Katakana learning app for Android. 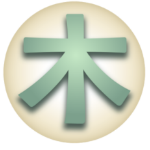 Kanji Tree gives learning features of reading and writing Japanese kanji and it is completely free unless you would like to have extra bonus features like speech output etc.

Memrise is one of the most popular language learning apps in both iOS and Android. It is a bit like a game as you get points for correct answers with a simple and friendly layout. It makes use of SRS (spaced repetition system), which is very effective for remembering things long-term. There are plenty of user-made decks and while you can create your own decks as well, Memrise is wonderful if you simply want something to get started with right away. AnkiApp is a mobile flashcards app. You can make flashcards with text, sound, and images, or also download pre-made ones. 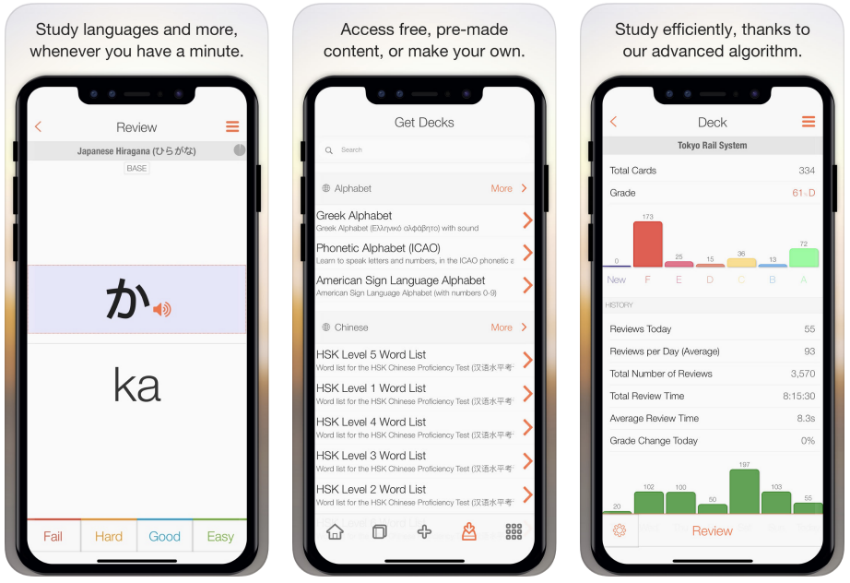 With LingoDeer, you can learn Japanese, Korean and Mandarin Chinese in English, Spanish, German, French. The app is usable offline as well. 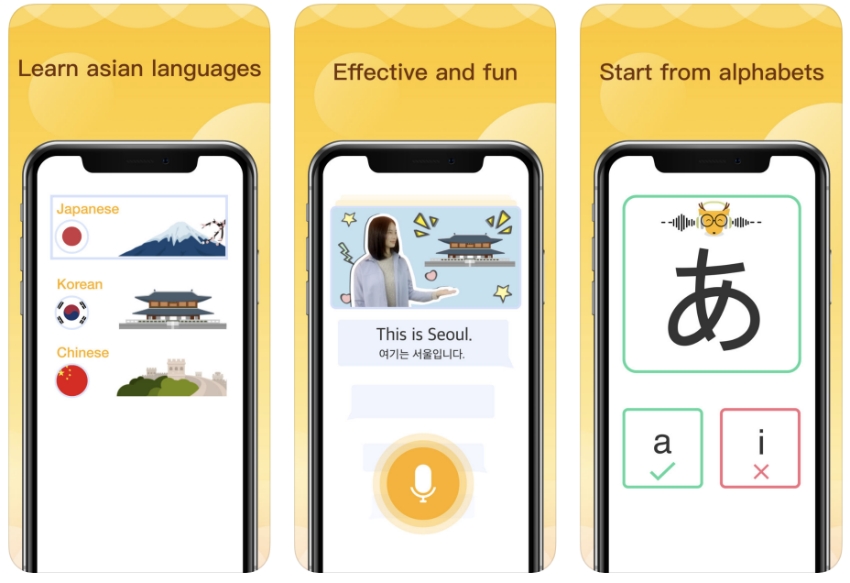 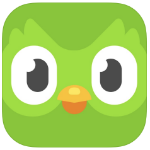 Duolingo is used over 300 million learners and it's been the most popular way to learn languages. You can practice writing, reading, listening, speaking, and conversation. 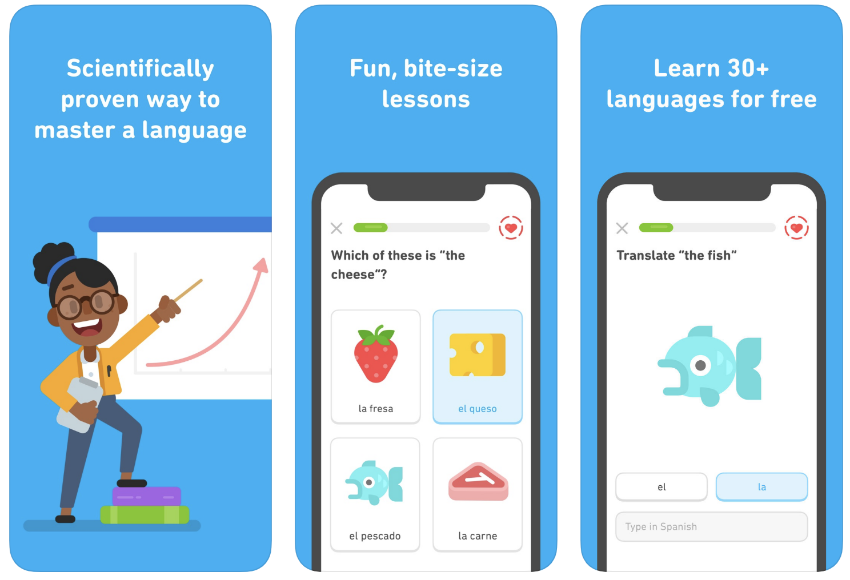 Drops is has over 33 free languages to choose from. Its beautiful word games make learning a new language fun. The content is 100% free. 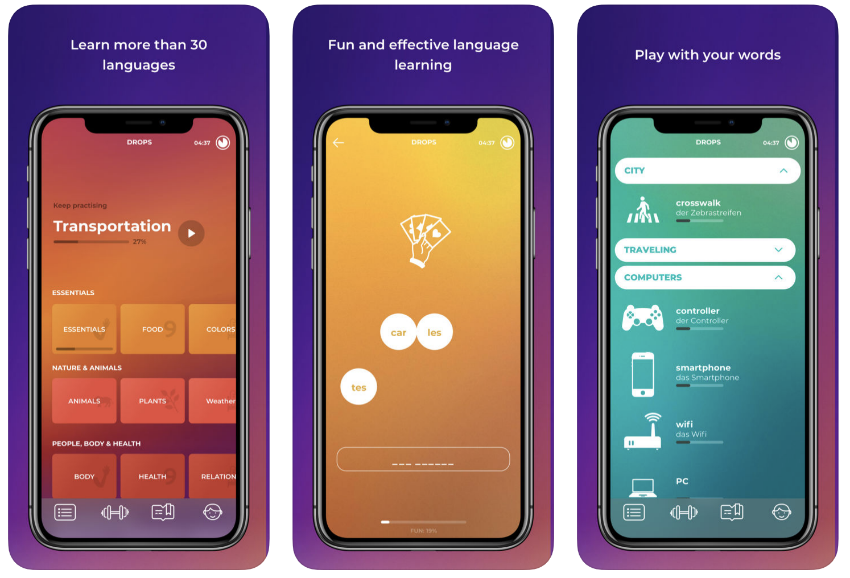 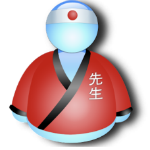 JA Sensei Learn Japanese is an app for Android. It provides clear Japanese lessons and a lot of exercises to learn Hiragana, Katakana, Kanji, Japanese words, , phrases, numbers, verbs... It's also suitable to study for the JLPT. 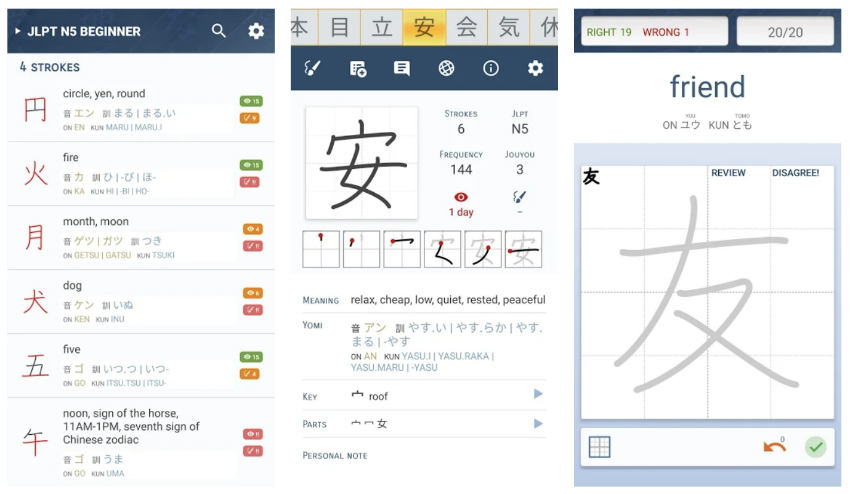 Obenkyo is a great all-in round learning app for Android. Obenkyo is suitable for all levels, from beginner through to advanced N1 level. It also tests you in various ways including handwritings. 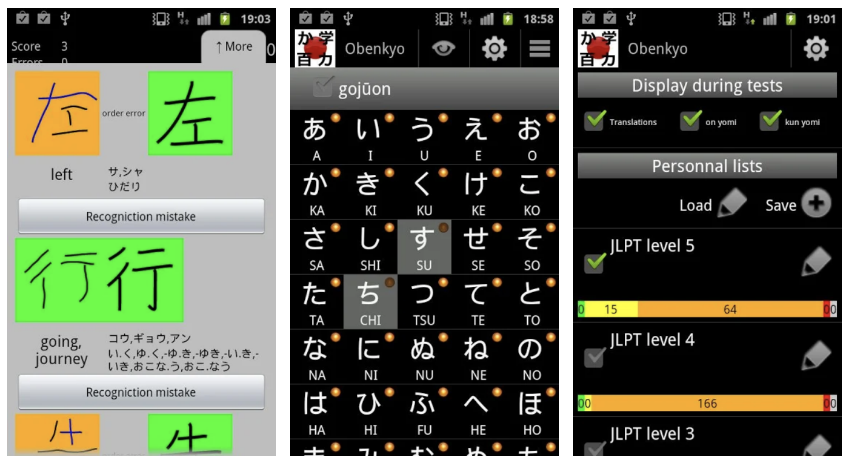 AnkiMobile Flashcards (iOS) or AnkiDroid Flashcards(Android) is not only for languages, but among the apps for learning Japanese kanji and vocabulary, it is known to be extremely effective. "Anki" actually means, "to memorize," and this app helps you toward that aim. You can build your own decks or download other people's (and share your own). The decks are entirely customizable: choose how to structure them, whether to include audio or images, how many you want to study, and how often. Choose to flip the questions and answers, mark how easy or difficult you found a card, and switch on an answer timer. It also allows your to sync with multiple devices so that you can study anywhere, anytime. 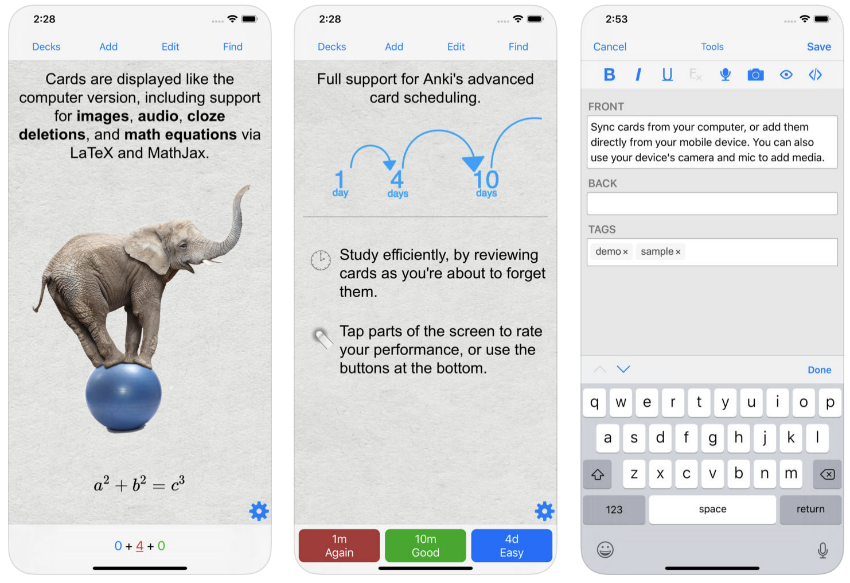 Learning Japanese with Tae Kim is one of the best Japanese learning apps you'll find online - and now there's a mobile app too. It's called Learning Japanese and it's a great on-the-go reference for when you want to quickly revise a grammar point or get your head around something you don't understand. The lessons break things down in a clear, logical manner and instructions from beginner to advanced are provided; what's more, all kanji are clickable. Whether you don't have time to attend classes or simply want to supplement the classes you are attending, this is an excellent tool. 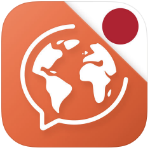 Mondly is available for iOS and for Android. It's a complete online language learning platform, with over 45 million users. It includes daily lessons, chatbot conversations, language exercises and tests. You can learn and practice Japanese from any of the 33 languages available, without needing to use English. Mondly complements traditional learning methods and textbooks by using technologies such as speech recognition, augmented reality and virtual reality to create new, immersive learning experiences. 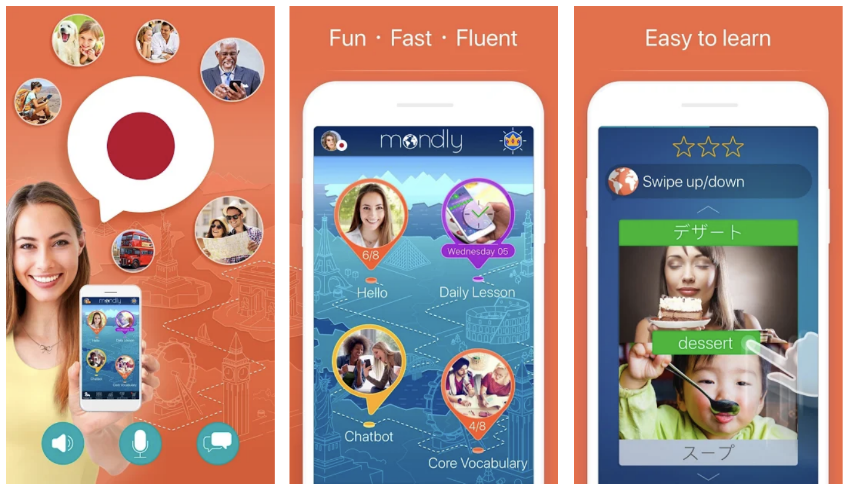 Google Translate (for iOS and for Android) has a huge volume of words and several useful features all in one place. It can translate text from photos or in real-time using an augmented reality feature - fantastic when you want to quickly translate a sign or the ingredients on a product at the supermarket, for instance. You can use the audio function to speak for you, and it has audio recognition software too. It even lets you draw kanji characters with your finger and then tells you the meaning. NHK News Web Easy improves your reading skills. There are no English translations provided, but the stories are relatively simple and hiragana characters are written over the kanji, making each word easier to look up and understand. You might use this tool for comprehensive study or just read the stories during your commute and see how much you can process. Exercises like reading the news are a satisfying way to put all that time spent with your flashcards and grammar to use.

These are good books to learn Japanese for beginners.

The Best Japanese Learning Apps are Just a Download Away 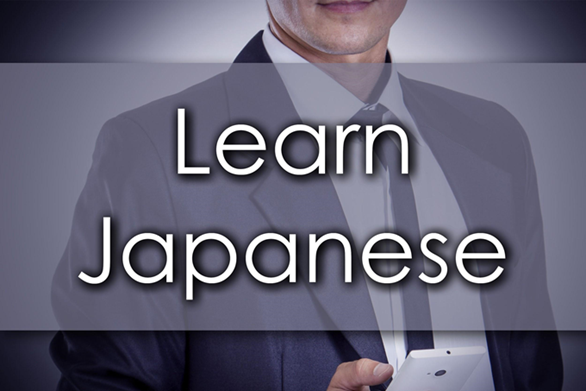 This list is only the tip of the iceberg when it comes to apps for learning Japanese language-there are plenty more out there. Take a few for a test drive, and once you've found something you like and continue to use it, you can watch your abilities progress. Before long you might find yourself able to read, understand and even converse when you are traveling around Japan! Of course, there are plenty of apps tailored to that journey as well.

One thing that you will need to be aware of is that there are different levels of politeness in the Japanese language. Knowing when to use polite forms of some words is very important during work. Not only do you need to worry about being polite to customers, but you need to be careful how you speak to your co-workers and superiors as well. Here is a short list of some polite and useful Japanese business phrases that will be useful in the workplace.

A List of English-speaking Japanese Language Schools in Tokyo